How to survive venomous snake bite 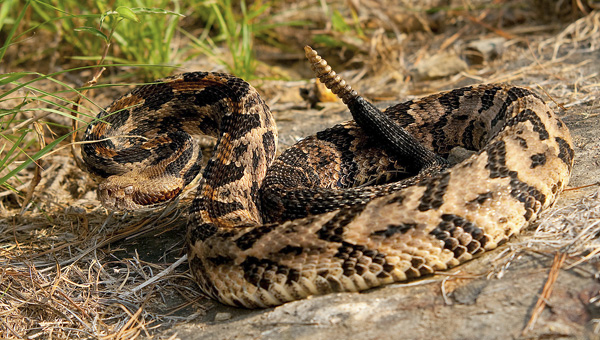 The timber rattlesnake is one of six venomous snakes in Alabama.

Snakes may be Alabama’s most misunderstood wildlife. A high percentage of people are both fascinated by and fearful of snakes. While not all snakes are venomous, you should take caution when outside during both day and night. Snakes are most active at night, especially in warmer weather.

Six of Alabama’s 40 species of snakes are venomous. Five of those are classified as “pit vipers.”

Pit vipers have a depression (pit) on both sides of the face between the eye and nostril. They have vertical, cat-like pupils along with triangle-shaped heads, thin necks and heavy bodies. Pit vipers have hollow, retractable fangs near the front of the mouth. Alabama’s pit vipers include the diamondback rattlesnake, timber rattlesnake, pygmy rattlesnake, copperhead and cottonmouth (water moccasin).

Alabama’s sixth species of venomous snake, the coral snake, is not classified as a pit viper. Coral snakes have oval, elongated heads with thin bodies. They have distinct body markings with a series of red, yellow and black bands, while their head and snout are both black.

Several nonvenomous snakes found in Alabama resemble the coral snake. However, the easiest way to distinguish between the coral snake and its lookalikes is to remember the quotation, “red on yellow–kill a fellow; red on black–friend of Jack.”

All snakes will bite when threatened or surprised, but most will avoid people if possible. Pit vipers, however, tend to be more aggressive snakes than most, including the coral snake. Rattlesnakes are the only snake equipped with a warning mechanism (rattlers) that gives notice that you are in danger and getting too close. Coral snakes tend to move away when threatened to avoid contact with predators, but not always.

Bites from any of Alabama’s venomous snakes can be deadly if not treated quickly. If you are bitten by any of the aforementioned snakes, the following is a list of some of the symptoms you could experience: blurred vision, dizziness, fever, excessive sweating, fainting, rapid pulse, skin discoloration, swelling at the site of the bite, pain at site of bite, low blood pressure, numbness, nausea and vomiting, breathing difficulty and thirst.

If you find yourself in a situation where you or someone you are with has been bitten by a venomous snake, take these steps to ensure you survive and make it to a hospital for the appropriate treatment:

· Keep calm. Restrict movement and keep the affected area below heart level to reduce the flow of venom.

· Remove any rings or restricting items from the affected area due to swelling.

· Create a loose splint to help restrict movement of the area.

· Clean the wound but don’t flush with water.

· Wrap wound with compression bandages. Go about 4 inches above the wound, wrapping as you would a sprained ankle.

Below is a list of things you should not do when bitten:

· Do not allow for over exertion.

· Do not apply a tourniquet.

· Do not apply a cold compress to a snake bite.

· Do not cut into the bite with a knife or razor.

· Do not try to suck out the venom by mouth.

· Do not give/take any stimulants or pain medication unless instructed to do so by a doctor.

· Do not raise the site of the bite above heart level.

· Do not drink caffeine or alcohol.

During warm months, avoid areas where snakes inhabit such as overgrown/grassy areas, woodpiles and debris and thick woodlands. If encounters with these areas are unavoidable, be sure to wear the appropriate clothing like long pants, snake boots or snake chaps and gloves.