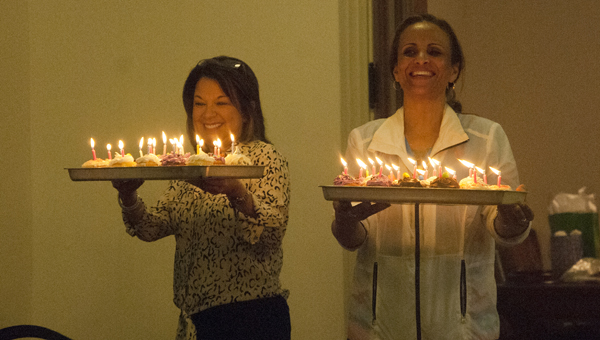 Cindy Reeves and Aliquippa Allen bring out birthday cupcakes for the cancer survivors at the Survivor’s Banquet. The American Cancer Society, which puts on Relay For Life events across the country, is “The Official Sponsor of Birthdays.”

The Relay For Life Survivor’s Banquet was held Friday evening at Rooster Hall in Demopolis.

The banquet is to recognize those who have battled cancer.

“It’s a good opportunity for us to honor those who have fought and survived cancer,” Relay volunteer Cecil Williamson said.

“We use this event to recognize those who have won the fight, and it lets them know that there are people thinking about them.”

Williamson said 217 invitations were sent out to survivors across Marengo County. Approximately 40 survivors attended the event.

“The bad weather kept some people away,” Williamson said. “It’s good to have everyone that made it here.”

Barbecue and chicken plates were served to the survivors, and Williamson said all the meat for the event was donated by South’s Finest Meats in Demopolis.

After dinner, the survivors were served birthday cupcakes, and “Happy Birthday” was sung. The American Cancer Society, which puts on Relay For Life events across the country, is “The Official Sponsor of Birthdays.” 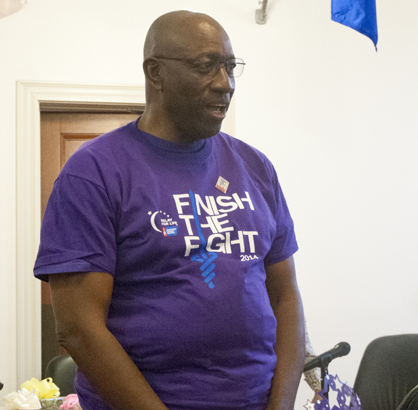 One survivor at the event, Robert Raymond, has fought and beaten cancer twice.

“We got it in remission, and I thought I was going to be OK from there. Four years later, I was diagnosed with Non-Hodgkin lymphoma and was given a 45 percent survival chance.”

Non-Hodgkin lymphoma is any of a large group of cancers of white blood cells.

This type of cancer can occur at any age and are often marked by lymph nodes that are larger than normal, fever and weight loss.

Raymond said he was told it could be treated with more chemotherapy or a bone-marrow transplant, but neither one guaranteed survival.

He added he had tests done for two years after the diagnosis to check his progress, but the cancer wasn’t going into remission.

“I got up with somebody that got me started on a good nutrition plan, and last year, I went back to the doctor and I was clear,” he said.

“The doctor told me three things: stay away from grease, get 20-30 minutes of sunshine every day, and find a way to help somebody every week and don’t expect payment, and I’ve been doing it ever since.”

A pair of survivors at the event, Preston and Valada McCloud, fought the disease just years apart.

“This is a great event,” Preston McCloud said. “It lets people know that others are thinking about them, and to me, that means a lot. It’s a blessing that we’re here.”