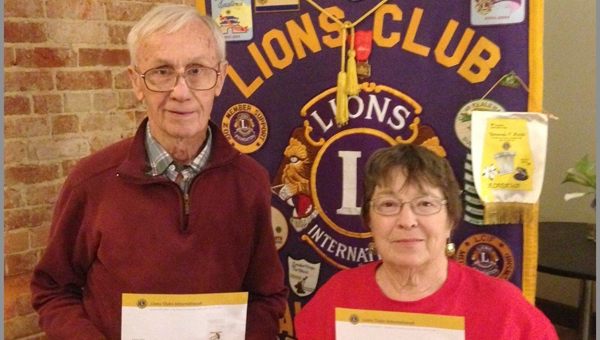 Billy Flowers has been a member of the Demopolis Lions Club for 60 years. He is shown with past club president Kathi Wilson.

For more than 60 years, Billy Flowers has served his community as a member of the Demopolis Lions Club.

“Lion Billy,” as he is known by club members, is the senior most member of the club but still a very much active one.

Flowers was recently recognized by the club for his long-lasting devotion.

“He’s been an outstanding asset to the club and the community for the past 60 years,” said club president Justin Pruett.

Flowers married his wife, Florence, 65 years ago at age 24. They have three sons.

Flowers worked as an auto mechanic for more than 31 years at Chevrolet of Demopolis before retiring and teaching at the Thomasville Trade School.

In 1954, Flowers joined the Lions Club after serving in the military during World War II. During his time as a Lion, he served as district governor and in every major club officer position.

Lions Club International was founded in 1917 and today has more than 46,000 clubs and more than 1.35 million members in 200 countries across the world. Their motto is, “We Serve.”