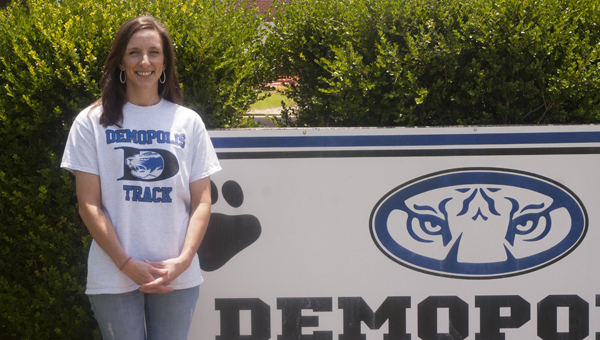 Lisa McHugh, a special education teacher at Demopolis Middle School, was named the Golden Apple Teacher of the Year. She teaches a self-contained multi-disabilities class at the school.

A local special education teacher has been named WAKA-TV’s Golden Apple Teacher of the Year.

She became eligible for the award after being named Teacher of the Week in December. McHugh said she was originally nominated by Kenny Freeman.

“It’s still not real to me. I never thought I’d win, and I feel like it’s more credit than I deserve,” McHugh said. “It’s a great honor, and it’s been an experience of a lifetime.”

McHugh said she went through a wide range of emotions when she found out that she was named the winner of the award.

“I was shocked, surprised, overwhelmed, nervous…I didn’t know what to think,” she said.

She has been teaching special education for eight years, but this is the first year DMS has had the self-contained multi-disabilities classroom.

“I’ve always wanted this class,” she said. “These children take an alternate assessment, and I’ve asked for years for us to be able to offer that. These students are like my babies. They’re the ones that really need you.”

She said one of the most challenging parts of her job is meeting the individual needs of each student.

“You have to be flexible and cater to each student,” she said. “The students range from having autism to traumatic brain injuries. They have good days and bad days, and you never know what you’re going to get when you come to work. They each have their different ways.”