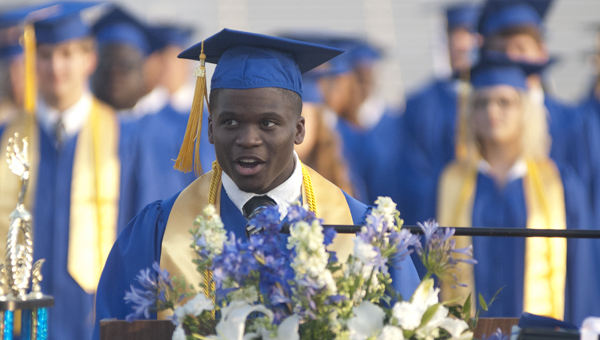 DHS class president Jordan Williams speaks to his peers and a crowd of parents and families during Friday’s graduation ceremony.

The Demopolis High School Class of 2014 received their diplomas Friday night at the school’s graduation ceremony at Tiger Stadium.

The DHS Concert Band ushered in the graduates by playing “Pomp and Circumstance” during the processional, as hundreds of parents, siblings and friends looked on. Class president Jordan Williams then led the crowd in prayer.

Class salutatorian Riley King address the crowd and spoke about how her class has always been competitive, ever since elementary school.

“At Westside, we competed to have the best AR scores,” King said. “At U.S. Jones, we competed in the spelling bee. As we got older, nothing changed.”

King went on to say the Class of 2014 will go on to achieve great things. 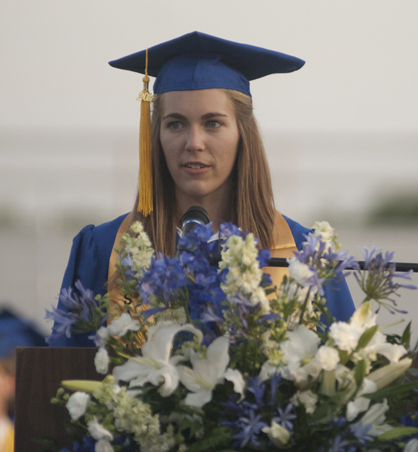 “We’ve always been driven to be the best,” she said. “We strive to be No. 1, and we support each other in everything we do. We take pride in our classmates.”

She added that her class liked to have fun and expressed themselves in different ways.

“We often expressed ourselves in song and dance,” she said. “We are crazy and different, but that makes us who we are.”

DHS Principal Dr. Tony Speegle handed out awards during the ceremony to seniors that have made a difference in their high school careers.

The Tommy Brooker Award, given to a male based on character and leadership, went to Tyler Oates.

The James I. Bell Award, given to a female based on character and leadership, went to King.

The “I Dare You” Award, given to a male and female, was awarded to Lakendra Bruno and Oates.

Finally, the Balfour Award, given to the most outstanding senior based on scholarship, achievement and loyalty, was awarded to Tyler Merriweather.

Class valedictorian Braden Spiller opened by saying, “Life is all about choices.” 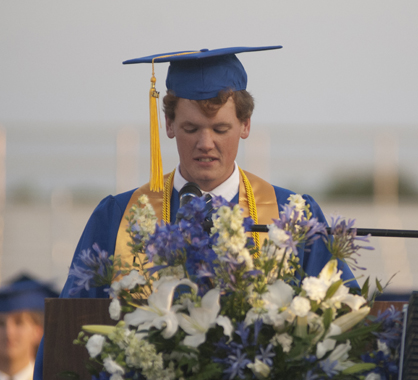 He went on to explain that everyone is faced with choices each day, and it’s up to them how they make that choice.

Spiller said the Class of 2014 has made the right decisions so far to make it to where they are now.

“I hope you continue to make the right choices,” he said. “I hope you take the road less traveled by, because it can make all the difference.”

Of the 157 graduates, 25 of them graduated with honors and 39 were Beta Club members.