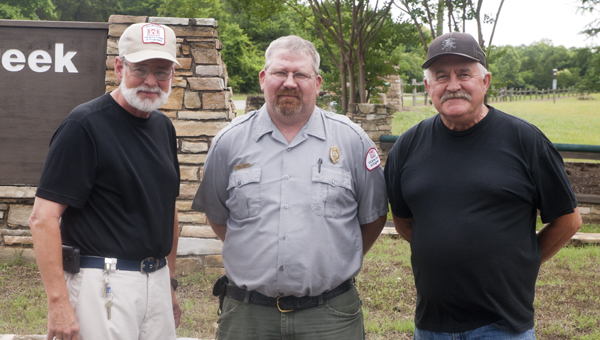 With nearly $1 million in budget cuts since 2008, the Demopolis Site Office of the U.S. Army Corps of Engineers has been looking for ways to save money.

The Black Warrior-Tombigbee Project, which covers 11 counties and 23 parks, saved $580,000 in taxpayer money by using volunteers instead of contractors for much of the work around the parks.

In the six Demopolis area parks alone, the Corps was paying out close to $100,000 per year to just gate attendants.

There are three sets of volunteers, or hosts, in each park. Brandon Smith, park manager for the Demopolis Site Office, said having hosts has helped the Corps cut costs tremendously.

“We’ve gotten comments from a lot of people saying it’s nicer than before,” he said. “The hosts are always looking for something else to work on. We’re just finding different ways to do business with a smaller budget.”

In return for volunteering with the Corps, hosts receive a free campsite, and they have their utility and laundry costs reimbursed. Smith said he requires a three-month commitment from the hosts.

“We have to spend some money on them for them to be able to do everything we need them to do, so we want them to stay for more than a couple weeks,” he said.

Harris Channell started volunteering at Foscue Park in July 2013 and does a little bit of everything around the park.

“I mow the grass, work on the walking trails and trim trees,” he said. “I planted the wildflowers, work in the gatehouse, check people in and out, just whatever I need to do.”

Channell is an Ohio native and plans to stay in Demopolis for about another year before continuing to travel across the country.

“I had no desire to be in the bidding process of contactors, and getting the campsite and utilities is all I need,” he added. “I live fulltime in an RV, and I view this park as my home. I don’t want it to look like I’m not proud of it.”

In addition to mowing grass and other day-to-day maintenance, the hosts also started cleaning park bathrooms. Smith said that saved $14,500 per month in the six local parks.

Smith said contractors are still used for electrical maintenance and similar projects, but hosts have done everything from planting flower beds to repairing stairs.

Park Ranger Harvey Hawkins said the work the volunteers do on the trails is a great help for him and the other rangers.

“When they sign a contract, it requires about 24 hours a week worth of work, and at a busier park like Foscue, they work around 35 hours a week, if not more,” he said. “A lot of the hosts are going to continue traveling, but they will often call to come back after a while, and that says a lot about Demopolis.”