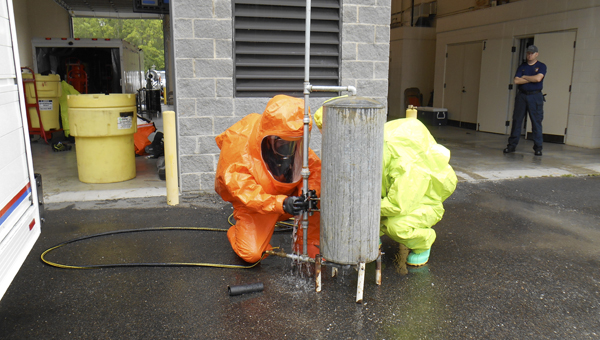 Demopolis Fire Department firefighters work together to fix a leak in a Hazmat training simulation.

After a recent Hazmat training course, all firefighters in the Demopolis Fire Department are Hazmat Tech Certified.

DFD Chief Tommy Tate said having all of the firefighters certified brings versatility to the department.

“All guys on all our shifts are certified now, so if something happens, it doesn’t matter what time, we can be there,” he said. “It also helps us with the regional Hazmat team. It makes us more valuable as a department.”

Capt. James Bailey works with the Alabama Fire College in addition to being a captain with the DFD. He led the class that certified the last five DFD firefighters earlier this month.

“We received a Hazmat Emergency Preparedness grant to help get books for the class,” he said. “We invited the volunteer fire departments in the area, but a lot of those guys don’t meet the prerequisites for the Hazmat tech class. They’re vital to us when there is a problem out in the county, though, because we can’t take an engine everywhere we go, and they’ll be there with an engine working the water and helping around the scene.” 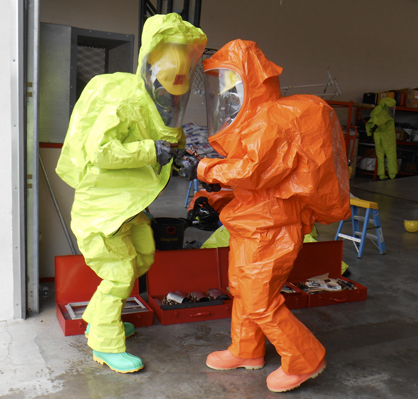 Bailey said the class was a pilot test for the Alabama Fire College. In the past, the classes have been crammed into 40 hours. With this most recent class, they extended the class to six days a week.

“I scheduled it to their new system to see how the time worked out because the biggest complaint they received from people taking the class was that there was too much information in too short of a time,” Bailey said. “We’d have to cover a whole book in two days and still do the skills training. This time, we were able to do 10-hour days Wednesday through Friday and use Saturday for testing.”

He added that there is still a lot to do for just a six-day class, but extending it slows down the pace to make it easier to get through the material.

With all of the Demopolis firefighters being Hazmat certified, Bailey said they’re now an offensive unit instead of a defensive unit.

“Before, we could contain a spill or something to a small area, and that’s being defensive,” he said. “Now, we can contain it to the original container by fixing leaks or whatever needs to be done. We can do more to keep the product out of the environment.”

Tate said with all the plants and the railway through town, a problem could occur at any time.

“There’s a lot that goes on along Highway 80 with the truck traffic, and we have a lot of plants around that use chemicals as well as the railroad,” he said. “We’re trained to handle any kind of situation that could come up.”

Bailey added that if there were a large-scale disaster, the Demopolis team is considered a federal resource and could be called to go to another state if necessary.

“More than likely, a larger unit like Tuscaloosa or Montgomery would be called out and we would backfill into their territory,” he said. “But if we were called on, we could be used out-of-state.”