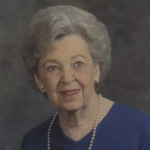 She was born Oct. 30, 1921, in New Orleans. She was a former clerical worker for the U.S. Agricultural Stabilization Conservation Service, and she was a member of the Linden Presbyterian Church.

She was preceded in death by her parents, Edward Clyde Hanson and Mary Lancaster Hanson; brother, Lynn Hanson; and her husbands, Bennie Hall and Charles Miller Jr.

Funeral services were held at Linden Presbyterian Church on Wednesday, June 4 at 2 p.m. with the Rev. Jerry Douglas and the Rev. Charleston Wilson, her grandson, officiating. Entombment was in the Linden Memorial Park Cemetery in Linden.

Condolences may be offered at www.obryantchapelfh.com.