The acronym for “To God be the Glory” (#2GBTG) echoed throughout Williams’ dominant performance that saw the 27-year-old break his own squat world record with a lift of 909 pounds before winning his first-ever World Championship with another world record of 2,144 total pounds. But it didn’t come without a little drama. 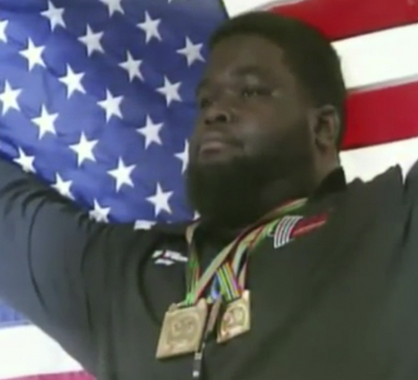 Needing to complete one of three attempts in the deadlift competition, Williams’ first attempt of 661 pounds was ruled a no-lift by the judges, leaving the Demopolis native with only two lifts to etch his name in the history books.

“I lost focus,” Williams said. “Fatigue really started catching up with me and I didn’t go through my rep like I had practiced so many times.”

On his second attempt, he approached the lift with a more focused and determined demeanor to successfully move 661 pounds and make his squat an official world record.

“I was mad at myself after that first lift,” he said. “I wasn’t going to be denied the second time around. I approached the lift like it was my last lift and it was now or never to accomplish what I came here to do.”

The international crowd of fans and competitors stood to their feet as they clapped and chanted Williams’ name to help power him through his final and successful deadlift of 716.5 pounds.

“It was unreal to hear all those people that didn’t know who I was before today chanting my name and wanting to see me break the record,” Williams said. “Hearing my name and knowing I had so many people were watching back home, I wasn’t going to let anyone down when I grabbed the bar.”

Reality set in for the world’s strongest man as he fought back tears during the closing ceremonies while standing atop the podium as the National Anthem played.

“That’s when it sank in that not only was I representing my family and ICC, but I was representing my country,” Williams said. “Yeah, that was a real special moment for me.”

Williams turned in a bench press of 518.5 pounds after three successful attempts during second event of the meet.