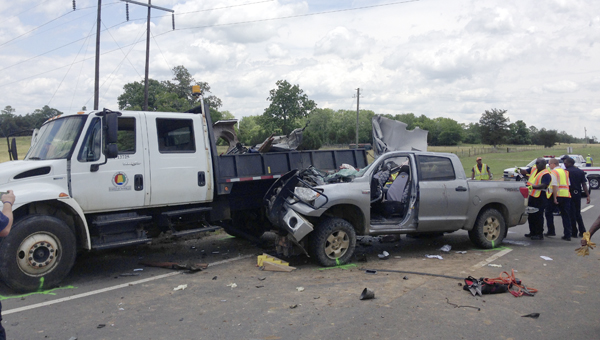 Three people were injured Wednesday in a two-vehicle accident on U.S. 80.

Five people were involved in a two-vehicle accident Wednesday morning on U.S. 80.

The crash between a Toyota Tundra and Alabama Department of Transportation resulted in three people being taken to area hospitals for treatment.

The driver of the Toyota was taken by ambulance, while his passenger was airlifted by Air Evac.

The pickup passenger, an approximately 19 year old man, was trapped by the truck’s dashboard. Crews worked more than a half hour to free him. 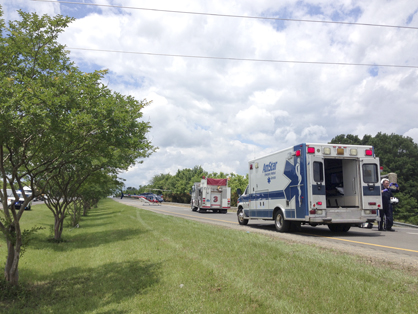 An approximately 19-year-old man was flown from the accident scene by Air Evac.

The driver of the ALDOT truck was also transported by ambulance. His two passengers were not injured and remained on the scene.

Demopolis Fire Chief Tommy Tate said he believed everyone would recover from their injuries.

“They are beaten and broke up but [should survive],” Tate said. “The paramedics did a great job.”

The accident happened close to 11:10 a.m. Emergency crews remained on the scene for more than an hour.

The crash occurred in the westbound lanes as you start up the final hill into Demopolis from Gallion.

Check back for updates on this story.