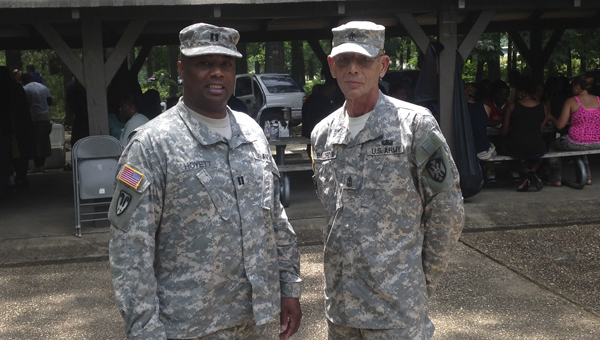 The 2101st Transportation Company specializes in hauling bulk fuel, but can also haul heavy equipment or anything they are called to do.

“We have the capability of hauling anything,” Company Commander Capt. Reginald Hoyett said. “We could move a whole unit if we needed to.”

Hoyett said the company has deployed to Iraq twice, once in 2003 and again in 2009. He has been the commander of the unit for more than two years, and a new commander will rotate in after his three years are up.

“Demopolis has always treated us well,” Hoyett said. “We respond to tornados and hurricanes, but we have the capability to do pretty much anything.”

Hoyett added that the company and the city have a good relationship.

“The schools allow us to use their track for our PT tests, and we allow them to use our armory for working on Christmas on the River floats,” he said. “We also have a contract with Farmhouse [Restaurant] to feed all of our guys because we don’t have a kitchen yet. Everyone really treats us well.”

The company holds a Family and Friends Day twice a year at Foscue, and Hoyett said it’s a way for members of the unit and their families, current and former, to come together.

“It’s more like a reunion than anything else,” he said. “We do it every June and December. It’s a great way to get all the families together of everyone in the unit now and who have been in the unit in the past. Foscue Park is a great place for us to gather because there are plenty of areas for the kids to play and for the adults to congregate. It’s always a lot of fun out there.”

Each year, the company participates in the Christmas on the River parade.

In addition to the Demopolis detachment of the unit, there are also detachments in Butler and Aliceville. In total, there are 147 people in the unit with approximately 80 of those in Demopolis.