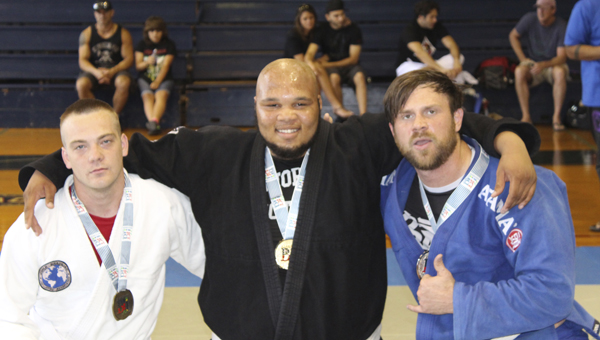 “Our final tally for the day was five first places and four second place finishes,” said Jay Russell, co-owner and instructor at Ross MA. “Our team also claimed the third place overall trophy for the gi division in the tournament.”

Russell said the tournament was the second of four seasonal events hosted by the ABJJF.

“We took a very small team to scout out the organization last year, and we really enjoyed it,” Russell added. “These tournaments aren’t as large as the NAGA events we go to in Georgia and Tennessee, but their close proximity make them much more convenient to attend.”

Tristen Fitz-Gerald, center, claimed first place in the 15-17 teen middleweight gi division and second in the no gi division.

“I’m extremely proud of our competitors,” Russell added. “Daniel performed exceptionally against some tough, high-level competition, Tony claimed his second absolute championship, and our youth grapplers were impressive with their aggression and technique.”

The team at Ross Martial Arts Academy, located at 1014 Highway 80 East in Demopolis, will spend the next month and a half adding to their physical conditioning, refining techniques and adding new moves to their arsenals in preparation for their next competition July 19 at NAGA Georgia in Atlanta.