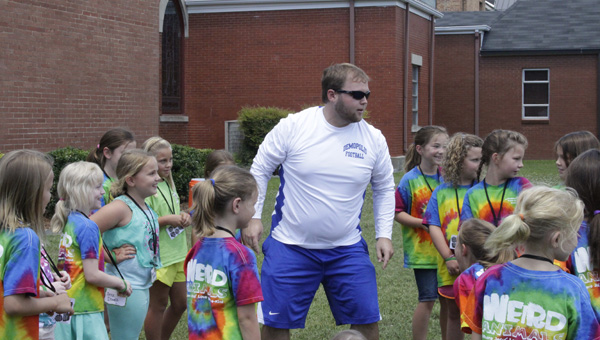 On Tuesday, June 17, the First Presbyterian Church and the First Methodist Church in Demopolis held their second day of Vacation Bible School lasting from Monday, June 16 to Friday, June 20.

The First Presbyterian Church’s Vacation Bible School was held from 9 a.m. to noon each morning. The theme was, “The Mystery of the Mystifying Miracles.” Each day had a different sub-theme. 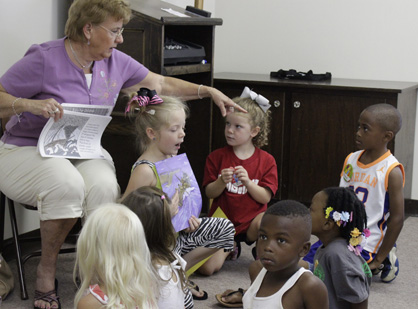 There were nearly 50 children in attendance. Each morning began with a brief puppet show with a story centered on the theme for the day. Before taking off to their daily activities, the children went over their memory verses for the day and sang along to hymns.

By 9:30, the children were off to begin their daily activities, which included the morning assembly, crafts, snack and recreation.

Andre’ Williams said his favorite part about VBS this summer was the snack provided.

During the first two days the children painted frisbees, made bracelets, played outside and learned about the teachings of Jesus.

Andrea Ward told the 4- and 5-year-olds the story, “Jesus heals the stormy sea.” Each child was provided with a picture to go along with the story. The children offered suggestions of how Jesus could have calmed the sea. Jimmy Mackin told them that it was not magic but the power of God through Jesus.

Joy Mackin taught the older children attending VBS that Jesus is always with them and to remember to keep their eyes on him. The kids filled in her words as she read to them with enthusiasm.

Each summer the First Presbyterian Church takes up offerings that go to a different charity to benefit children throughout the world. This year the church took up offerings to help provide clean water for children around the world through Samaritans Purse. The church will continue collecting donations through the end of the summer.

The First United Methodist Church had their VBS program entitled “Weird Animals” from 1:30 p.m. to 5 p.m. during the week.

Nearly 150 children participated in the program with approximately 31 adult volunteers and 11 youth volunteers leading them through the jungle that was “Weird Animals.”

Each day had its own Bible point. Activities included the opening and closing skits, the Imagination Station, where the children interacted with animals, learned about science and worked together to create things such as paper airplanes, the Kid Vid Cinema where the children went to watch videos, singing time and snack.

Volunteer Julie Massey sent flying discs of different sizes and colors around the room in the Imagination Station.

She asked the kids if they knew which way they would fly and if they would all go in the same direction every time. The children determined that unexpected things happen all the time. Like the flying discs all people are different and may go in different directions, she said.

“Unexpected things happen all the time,” Massey said. “People are all different but it doesn’t matter because even when you’re different Jesus loves you.”

Volunteer Kaitlyn Freeman introduced the story time visitor to the fourth and fifth-grade boys by having them do jumping jacks and push ups. Volunteer Andi Tuberville then came in to tell the boys the story of Jesus and the Samaritan Woman.

With all of their volunteers in action at FUMC, the VBS program turned out to be a huge success.