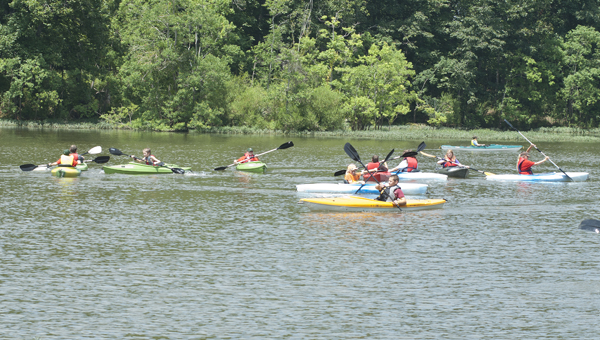 During the 2013 Feathers, Fins, Fur weekend, campers were able to spend time on the river kayaking.

The annual Feathers, Fins and Fur youth weekend at Foscue Creek Park will be held July 26-27.

The event is open for children ages 8-17 and registration is ongoing. The cost is $35 per child and $20 per adult, and children must be accompanied by an adult. The registration fee includes a National Wild Turkey Federation Juniors Acquiring Knowledge, Ethics and Sportsmanship (JAKES) membership, a Ducks Unlimited Greenwing membership, meals, activities, raffles, a campsite and prizes.

Campers are not required to stay overnight at Foscue Park on Saturday, but for those who pre-register, the cost would be included in the registration fee, according to Brandon Smith, Demopolis site manager for the U.S. Army Corps of Engineers.

The weekend will kick off Saturday, July 26 with registration at 7 a.m. The events throughout the day will last from 8 a.m. to 5 p.m. and will include a retriever demonstration, duck calling, a catfish rodeo, kayaking and turkey calling. 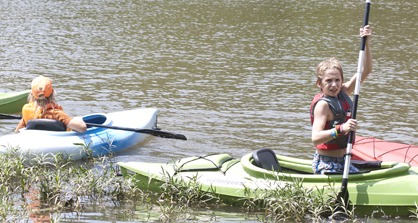 Smith said there will also be three new events during the weekend this year. Big Daddy Lawler, who hosts the “Gettin’ Outdoors” radio show in Thomasville, will bring the Alabama state record alligator to be on display. The Alabama Department of Conservation and Natural Resources will bring a target shooting simulator that will test the shooting accuracy of campers. Smith said there will also be an obstacle course that will end with a water slide.

Campers will stay the night in Foscue Park and have the option to attend a Sunday morning church service at 6:15 a.m. Sunday morning. From 7 a.m. to noon Sunday, there will be skeet shooting and giveaways.

The grand prize giveaway this year will require some effort from the campers.

“We’ve never done anything this big before, but we’ll be giving away a lifetime hunting and fishing license,” Smith said.

He added that the value of the license is approximately $750. In order to be eligible to win the prize, campers must write a brief essay Saturday night about what they have learned about wildlife and the outdoors during Feathers, Fins, Fur. There will be a judging Sunday morning and the prize will be announced before the conclusion of the event.

In addition to the grand prize giveaway, other giveaways will include duck calls, turkey calls, decoys, tree stands and a signed Boyd Duckett fishing rod.

Smith said one thing he’s most looking forward to seeing during the weekend is the duck decoy kayak race.

“We’ll place decoys out in the slough of different duck species, and they’ll have to use what they’ve learned to go to the correct ducks,” he said. “It’ll be a lot of fun to see them put their identification knowledge to the test.”

Registration forms are available at www.surveymonkey.com/s/F32014 and checks may be made payable to NWTF and sent to Smith at 684 Resource Management Drive, Demopolis, AL 36732.

Smith said they will take around 100 campers for the weekend. As of Wednesday afternoon, there were 37 campers registered.

Feathers, Fins, Fur is sponsored by the National Wild Turkey Federation, Ducks Unlimited, the ADCNR Division of Wildlife and Freshwater Fisheries and the U.S. Army Corps of Engineers.