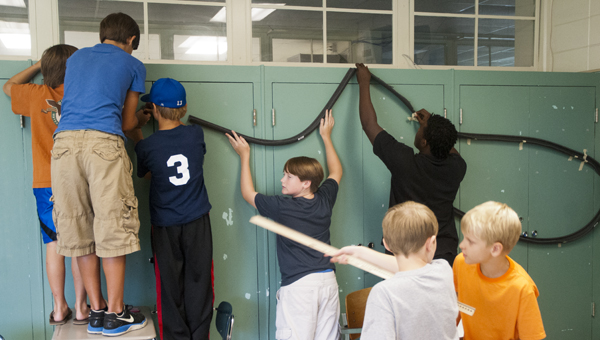 Members of the Demopolis Robotics Team work with elementary school students during the team’s camp this week. Campers used styrofoam piping to make roller coasters to learn about speed and energy.

The Demopolis Robotics Team hosted a camp for elementary school children this week as part of an outreach program for the BEST Robotics Competition.

Members of the team coached campers through different activities during the week to help teach them more about pre-engineering.

Ashley Brock, the sponsor and coach of the robotics team, said the campers have enjoyed doing the different activities.

“It’s been going really well,” she said. “We have 13 campers, and I feel like that’s a really good number. The kids are really enjoying building different things and learning about what goes into robotics.” 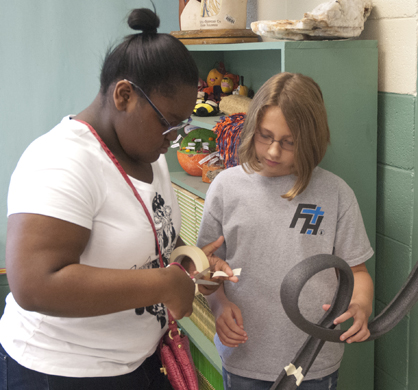 Throughout the week, the campers have built robots with Lego robot kits, which the robotics team members helped program them to move.

“They’d build a robot and the team members would help them program it to move, then they’d tear it down and build something else,” Brock said. “They’re doing really well with the different activities.”

She added that it has been an adjustment for the robotics team members being teachers instead of students.

“Some of them love to teach, and some of them are still learning,” she said. “Most of them have never worked with younger kids before, so it’s a new experience. They’re doing a really good job of jumping in and helping, so after I introduce an activity, I’ve been able to step back and observe for the most part.”

Adam Gibbs, a camper during the week, said he enjoyed being able to build different things.

“I’ve learned a lot,” he said. “I enjoy it here. They teach a lot about building, and building robots has been my favorite part so far this week.”

On Thursday, the campers learned about energy and how it has an effect on everything. They used styrofoam piping to make roller coasters, then used marbles to test how speed and gravity play into the process. Some campers added loops and twists to their roller coasters, while others made them without as much difficulty.

Last year, Demopolis Middle School started the robotics team, and they advanced to the South’s BEST Regional Robotics Championship. The team qualified for the regional competition by finishing second place in their first ever competition.

Brock said she hopes having younger students involved in this camp will bring interest to the program when they get into the seventh grade and can join the team.