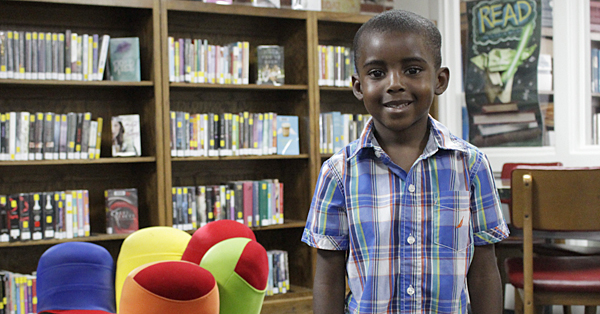 Landyn Jones is this week’s Demopolis Times’ “Reader of the Week.”

Landyn Jones, 4, has been named The Demopolis Times’ “Reader of the Week” at the Demopolis Public Library. He lives in Demopolis with his parents, Henry and Latara Jones; his older sister, Lacher Gray; and younger brother, Brinnin Gray Jones.

Landyn has been attending pre-school at the Fairhaven Baptist Church and will enter kindergarten at Westside Elementary this fall. He has been enjoying the times he has spent at the library during the children’s summer reading program “Fizz, Boom, Read.” His favorite moment so far was when LewE the Clown visited.

The Berenstain Bears book series is a compilation of heartwarming tales about a family of grizzly bears. Originally authored by Stan and Jan Berenstain, the series saw its beginnings in 1962. Following the death of Jan in 2012, the pair’s son, Mike Berenstain, took over full authorship. There are over 300 hundred titles in the series.

“Chicken Little” is the classic tale of the young chicken who believes the sky is falling. The story is a retelling of Paul Galdone’s, “Henny Penny.” There have been many different versions of Chicken Little and an animated film adaptation in 2005.

For more information on events going on at the library this summer, visit the Demopolis Public Library or contact Library Director Morgan Allen at (334) 289-1595.