The Linden Police Department arrested a suspect Sunday morning who was wanted for murder in Escambia County, Fla.

Jarrod Blackmon, 23, was wanted by the United States Marshals Service and the Escambia County, Fla., Sheriff’s Office for first-degree premeditated murder for the shooting of Tabius Huff on Sunday, June 22. He was one of three suspects wanted in the murder. There is still one suspect at large, but he is expected to be in Florida, according to Linden Police Chief Scott McClure. 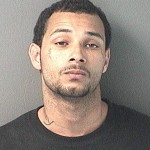 Clint Sumlin with the 17th Judicial Drug Task Force received a call Saturday from the Marshals Service that Blackmon was believed to be in Linden.

Sumlin worked with McClure and the Linden Police Department to find the car that was described by the Marshals.

“When Clint gave us the description of the car, we kept a watch and checked around to some placed we believed he could be, but nothing came up,” McClure said. “Then early Sunday morning, we received a tip and followed through on it to find the car.”

McClure said they waited for Blackmon to come out to the car, and when he did, they attempted to apprehend him, but he was able to get in his stolen vehicle and lead the officers on a short chase through Linden. Blackmon crashed his car into a ditch and damaged a trailer before fleeing on foot, but LPD officer Robert Alston was able to chase him down and apprehend him.

“We apprehended him without incident, and he was taken to the Marengo County Detention Center then turned over to the Marshals,” McClure said. “Everybody did a great job. We had a lot of help from Clint, the Demopolis Police Department and several state agencies. It wasn’t just my department. We can’t know everything, and we rely on tips. We got a good tip and followed through, and I’m happy with the outcome.”