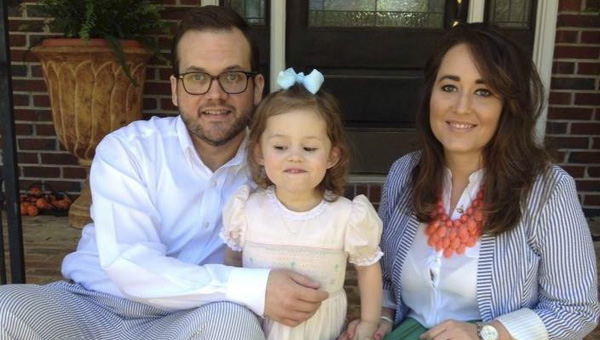 James Burden will play Robbie in the Canebrake Players’ production of “The Wedding Singer.” He is shown with his wife, Erin, and daughter, Ella Giles.

To marry or not to marry, that is the question to be answered by the lead singer in the Canebrake Players’ upcoming summer musical production, The Wedding Singer. Will he heed the advice of his friends or do it his way?

James Burden is a busy guy. This husband to the former Erin Willingham and father of a three year old, Ella Giles, is currently the procurement manager at CEMEX in Demopolis.

He is “all about” personal relationships, considers himself an “extrovert,” and thoroughly enjoys the opportunity to meet and talk with new people each and every day.

James has been involved in music and singing since the age of 5 or 6 and never really participated in community theater until he moved to Demopolis in 2005.

His first role was the voice of Audrey in “Little Shop of Horrors,” and after that, he was hooked, stating he has been in love with theater ever since.

James’ theater involvement includes the following: “Little Shop of Horrors,” “All Shook Up,” “Ring of Fire,” “Joseph and the Amazing Technicolor Dreamcoat,” “See How They Run,” and most recently, “Return to The Forbidden Planet.”

He feels the LSOH role allowed him the opportunity to showcase his vocal range, while the role of Cookie in “Forbidden Planet” was more physical and in your face.

He openly admits he auditioned for TWS because it was the latest summer musical.

The show’s director, Kirk Brooker, intentionally did not announce the name of chosen play until auditions.

Once James learned of the show, he said he was strongly hoping to play Robbie because he absolutely relates to his character – a guy who adores music and adores life – even though his sensitivity has a tendency to get in his way at times.

He is the “nice guys finish last” poster child – until he meets the girl of his dreams.

Having previously been the character that gets overlooked for someone else, James is most pleased with his first role to “get the girl.”

James was also very candid with sharing personal information about himself and his life – post gastric bypass surgery two years ago. (This writer did not recognize him in The Forbidden Planet and had to inquire about his personage.)

TWS is his second performance and his first lead role since surgery, and having a romantic lead reinforces his happiness at having made a total life-changing decision.

He readily admits he is more confident and excited to have the opportunity to be the man he has always wanted to be.

This type of life change can be surreal and sometimes emotional, and James is thankful to be where he is at this time in his life.

We are all thankful for him.

James was asked to share something people either do not know about him or something he would like for people to know.

He said this is tough, as most people, especially people who read his Facebook page, know he is “horribly opinionated,” he adores the stage, loves entertaining people, making them laugh, hopefully bringing them some semblance of joy.

Lastly, one of his greatest joys is making his wife Erin laugh. He said that often his humor is lost on her.

“My greatest accomplishments in life are the days that I can make her tear up from laughing so hard,” he said.

“There is no greater sound than the laughter of Erin and my precious Ella Giles.”

Of course…it’s much easier to entertain a three year old.

“She’s a great audience,” he said.

Keep it up James Burden. We are all looking forward to being your audience at “The Wedding Singer.” Laughter is great medicine.