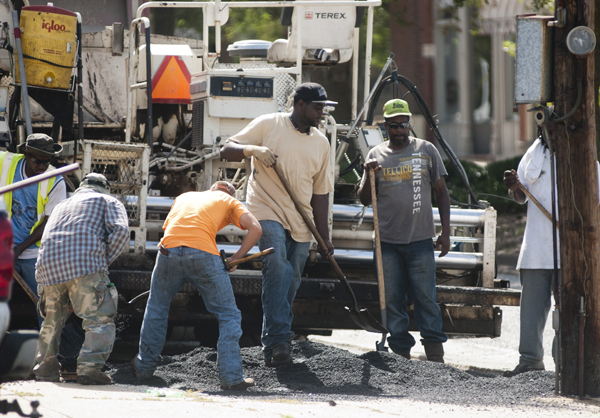 A $1 million project to pave streets around Demopolis has begun.

Construction crews from ST Bunn started working on Main Avenue in Demopolis near the Alabama Power office this week and will have most of the downtown area completed by the end of the week, according to Demopolis Public Works Superintendent Mike Baker.

“Everything is right on schedule so far,” Baker said. “There haven’t been any issues so far, and hopefully it will continue going smoothly.”

Baker said the work will continue through the end of the week downtown as they move east on Washington Street towards the police station.

“They’re fixing things along the way and paving a block or two down on Strawberry Avenue as well,” Baker said. “It takes time to get through it all, so I hope everyone will bare with us while they’re working.”

Demopolis Mayor Mike Grayson said the project is important for the city because people notice the streets before anything else when they drive through town.

“We want to promote Demopolis as a clean and safe community, and we want our streets to look good,” he said. “I don’t see it as anything but a plus. The only thing I’m disappointed about is that we can’t do all the streets in town.”

Grayson added that he hopes some grants will come available next year so more streets can be paved in Demopolis.

The mayor added that he’s pleased with the work that has been so far, but he knows it has been an inconvenience for some businesses.

Baker said the construction won’t interfere with the weekend’s Fourth of July activities.

Baker said once the downtown work is done, they’ll move to the residential areas that are planned for the project.

“They don’t know exactly where they’re going next after downtown is done, whether it’s east or west, but it will all get done,” Baker added. “They’re doing a good job with everything so far. Main Avenue looks really good. It just takes time to do everything right.”

The tentative schedule for the project is as follows: downtown area until July 7 or 8; Mauvilla Drive, July 9; Olive Drive and Marengo Drive, July 9 and 10; Powe Road, July 11-16.