Classical guitarist Jeff Bianchi will give a one-hour concert at the Coplin Building in downtown Demopolis on Saturday, July 12.

The performance, sponsored by the Two Rivers Arts Council, will begin at 7 p.m. 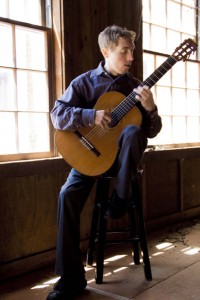 A native of Williamson, New York, Bianchi began performing at weddings and cafes while still in his teens. As his skills grew, he started giving full concerts throughout western New York.

His hard work earned him performances at the Rantucci International Guitar Festival as well as the nationally recognized Ithaca Guitar Festival. His concerts continued with his move to Atlanta in the summer of 2002.

On his return home, Bianchi resumed his solo performances. By 2009, he was touring throughout Georgia, playing in places such as Savannah, Tybee Island, Toccoa, Richmond, Duluth and Hartwell.

He undertook his first cross-country solo tour in February 2010. Making stops in Georgia, Mississippi, Louisiana and Texas, he gave concerts for audiences as large as 600 people. The overwhelming success of this tour enabled him to expand his solo career to a national level.

Bianchi continued his success in 2011 with performances in Kentucky, Tennessee, Georgia, Alabama, South Carolina, Mississippi, Louisiana and Florida. His success skyrocketed in 2012 and 2013 with successful concerts as far away as Colorado, Wyoming, Idaho and Wisconsin.

His 2014 concert schedule will take him to Alabama, Wyoming, Minnesota, South Carolina and Mississippi.

“I am excited and thankful to have the opportunity to perform in Demopolis,” Bianchi said. “Alabama has always been a great place to play. The audiences always make you feel welcome and respond positively to the classical guitar. I am really looking forward to having the chance to work with the Two Rivers Arts Council.”