Arrest made in January restaurant burglary

A Prattville man has been arrested in connection with a January 2014 burglary of a Demopolis restaurant. 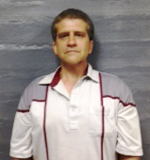 Carl Worth Howell Jr., 49, was charged Thursday, July 3 with one count of third-degree burglary.

Police believe Howell has been involved in several burglaries across the state, which are being investigated by other law enforcement agencies, according to DPD Chief Tommie Reese.

Back on Jan. 18, someone broke into the Subway on Highway 80 East and stole an undisclosed amount of money.

Reeese commended his department for their sustained investigative work.

“This shows that we don’t just give up cases; sometimes it just takes a while longer to get them resolved,” Reese said.