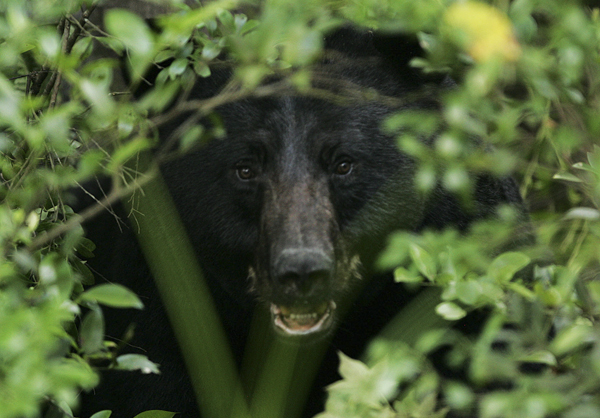 Black bear sightings are increasing across Alabama. Photo courtesy of the U.S. Fish and Wildlife Service.

By KEITH GAULDIN / Alabama Department of Conservation and Natural Resources

While Alabama’s black bear population is relatively low, estimated at less than 350 animals, it appears to be increasing as evidenced by higher than normal sightings.

Recent black bear sightings in Butler and Choctaw counties add to the growing number of observations outside the animal’s traditional ranges in the state. In recent years, bear sightings have also been recorded in Jefferson, Lee, Chambers and Macon counties.

Historically, a small population of black bear has remained rooted in southwest Alabama, primarily in Mobile and Washington counties. In recent years, bears migrating from northwest Georgia have established a small but viable population in northeast Alabama.

Changes in bear distribution and seasonal movement may be the result of a combination of factors. Habitat fragmentation due to residential and commercial development and a natural growth in black bear population are two potential reasons for the increase in sightings.

“It is quite evident that black bears are increasing in numbers and expanding the historic ranges,” said Keith Gauldin, Assistant Wildlife Chief for the Alabama Division of Wildlife and Freshwater Fisheries (WFF). “During spring and summer, adult males will cover surprisingly large areas in search of receptive females. Young sub-adult bears, recently ousted from their mothers’ territory, will also roam widely to establish their own home ranges.”

Black bears are typically secretive, shy animals that will avoid human interaction. Occasionally, a curious bear will explore a human-populated area in search of food.

To avoid accidently attracting a bear to your home, feed pets just enough food that they can consume in one meal. Secure uneaten pet food, trash bins, bird feeders and other wildlife feeders as they are easy pickings for hungry young bears.

What should you do if lucky enough to encounter/observe a black bear?

•Do not be frightened

•Do not approach the animal

•Do not run from the bear, back away slowly

•Make sure the bear has a unobstructed direction to escape

While bears are classified as a game animal, there is no open hunting season for black bears in Alabama. The public is encouraged to report black bear sightings to WFF district wildlife offices, online at https://game.dcnr.alabama.gov/BlackBear/, or by email to Keith Gauldin at keith.gauldin@dcnr.alabama.gov.