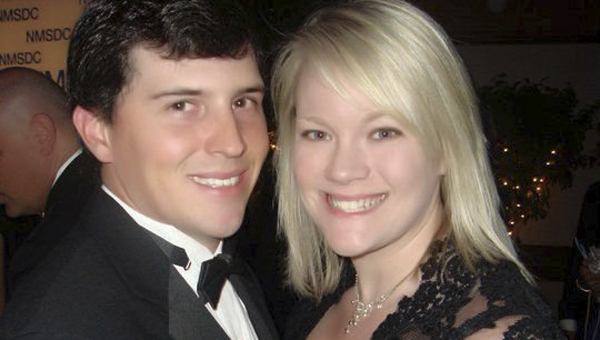 Kelley Jordan, shown with husband Daniel, will play Julia in The Canebrake Players’ upcoming production of “The Wedding Singer.”

Kelley Jordan will play Julia in the upcoming production of “The Wedding Singer.” The musical will premiere Friday, Aug. 1 at 7 p.m. at the Old School on Main.

For Julia, marriage is high on her priority list and she cannot wait to get married.

In real life, Kelley is married to Daniel Jordan and is currently office manager at First Presbyterian Church in Livingston.

She comes to “The Wedding Singer” with a lengthy career in community theater. Her first production was in “The Miracle Worker” at the University of West Alabama at age 5.

Jordan has over fifty productions, both on and off stage, under her belt. She has worked with Sumter Theater Workshop, the Demopolis High School Tiger Arts Guild, Birmingham Southern College, the Worship Arts Ministry at First Presbyterian Church, the Actor’s Charitable Theater and, more recently, The Canebrake Players.

Jordan portrayed Lucy in “You’re a Good Man, Charlie Brown” with the Demopolis High School Tiger Arts Guild, Nancy in “Oliver!” with the Canebrake Players and part of the ensemble in “Sweeney Todd” with the Actors Charitable Theater as well as “Hairspray” with the DHS Tiger Arts Guild.

Other productions include “Godspell,” “The Wizard of Oz,” “The Jungle Book,” and “Side by Side by Sondheim.”

She can’t name a favorite performance but with sound reasoning. Each production is a new adventure for her. Directors, cast mates, lines, music, sets, costumes and audiences all change making each show a different, but thoroughly enjoyable experience.

She said that she was at first hesitant about auditioning for “The Wedding Singer.” She really never thought 80’s music could be a part of her repertoire. However, after some research, she discovered what an absolutely enjoyable show it is and knew she could not pass up the opportunity. She was drawn to the role of Julia because of Julia’s personality and her musical numbers.

Jordan said she felt truly humbled to have been cast the part. Her character is the girl-next- door. She is oblivious to and tends to avoid drama. She focuses more on resolving conflict and on her own happiness.

When asked how she is able to tap into different emotions for her character, Kelly said, “finding your character’s personality is all about having fun and trusting your instincts. That and having a fabulous director.”

“I began taking dance lessons at the age of four. I’ve been in stage productions since I was five. I have been singing and taking voice lessons since I was seven. I recently added film to my resume,” said Jordan. “Even with over 20 years of performing experience, I still get extremely nervous every single time I perform, whether it be a lead role in a stage production or a small solo line during the anthem in church.”

No one in the audience will ever think about knocking knees while marveling at Jordan’s interpretation of Julia.