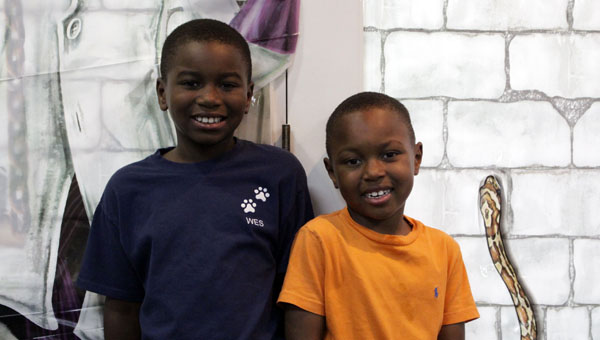 Brothers Corey and Jamarcus Davis are this week’s Demopolis Times “Readers of the Week.”

Brothers Corey and Jamarcus Davis have been named The Demopolis Times “Readers of the Week” at the Demopolis Public Library.

Corey, 7, and Jamarcus, 6, live in Demopolis with their great uncle and aunt, Silas and Rosemary Seabron, and their godmother, Patricia Johnson.

Corey will enter the second grade at Westside Elementary, while younger brother Jamarcus will begin the first grade when school starts. Both of the boys agreed that their favorite subject while in school is reading.

They have enjoyed spending time reading this summer during, “Fizz, Boom, Read” and plan to be part of next summer’s children’s reading program.

“The Marvelous Adventures of Gus Beezer with the Hulk” is a comic book written by Gail Simone. The comic, which can be found in the children’s section of the library, is a series that follows a young boy named Gus Beezer on his adventures with superheroes. Gus has a new super hero friend in each edition.

The children’s section of the library also contains “Hulk: The Incredible Guide” by Tom DeFalco. Released in 2003, the guide focuses on the Hulk’s entire 40-year career tracing every decade from the original comic book to the 1970’s television series to current day character developments.

The library’s summer reading programs may be over, but it is never too late to begin visiting your local library.

For more information on events going on at the library this summer, visit the Demopolis Public Library or contact Library Director Morgan Allen at (334) 289-1595.