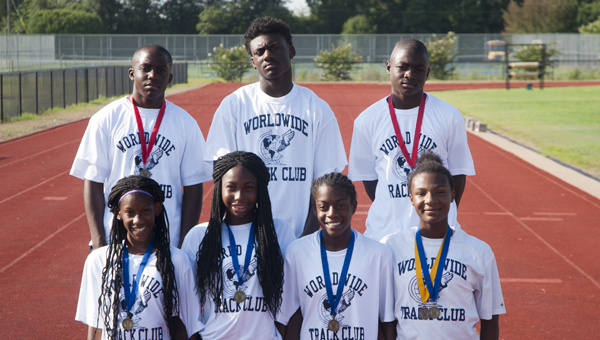 Eight members of Demopolis’ Worldwide Track Club will compete in a national championship meet in Texas later this month.

The runners qualified for the USA Track and Field National Junior Olympic Track and Field Championships by competing at the USATF regional meet at Samford University in Birmingham last weekend. The national championships will be held July 21-27 in Humble, Texas.

The members of the girls 4×100-meter relay team are Ny’Keria Grayer, Ashleigh Ivory, Yasmein Rainey and Shy’shawna Smith. They qualified for the national championship with a time of 51.17 seconds during the USATF Region 6 Championships.

On the boys side, the members of the 4×100-meter relay team are Antonio Besteder, Anthony Jackson, Alexander Besteder and Joseph Merriweather. They qualified for nationals with a time of 47.59.

Club founder Royce McKinney said he’s proud of the work of the team this summer.

“We have really exceeded expectations for our first year,” he said. “I knew we’d be pretty good and would compete, but I didn’t know we’d compete at this level this soon. It’s a great accomplishment for these eight kids to make it to nationals. I’m proud to see their hard work paying off.”

All of the runners that qualified for nationals are in the 13-14 age group.

“All these kids are in the Demopolis school system, and this program is to help develop them so that when they get to high school, they’ll be prepared to compete at a high level,” he said. “I’m really looking for these kids to compete at the high school level early on.”

McKinney said he hopes the runners competing at nationals will finish in the top eight in order to get a medal.

“In the relays, if we execute our handoffs and do everything the right we, we have a good chance to bring back a medal,” he said. “Coach Rodney Rowser has done a great job of helping the runners with their handoffs and getting them to where they can compete at this level.”