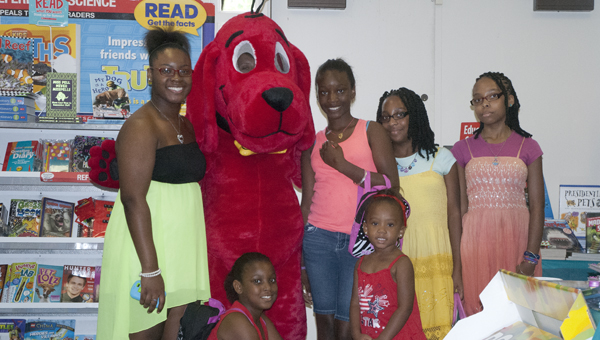 Library Director Morgan Allen said the goal for the book fair was to raise $1,500 for the library to be able to buy more books. 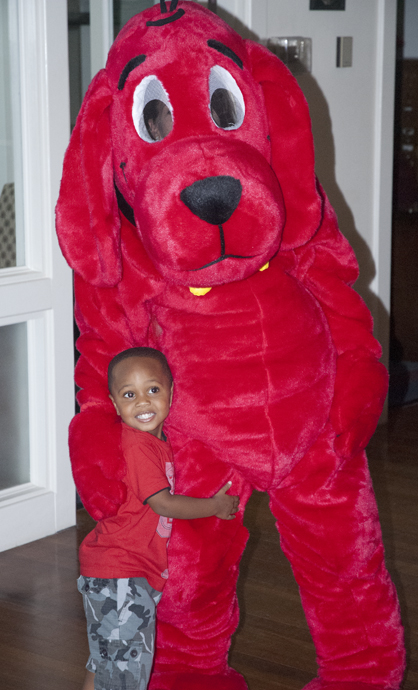 Demarrion Gracie is shown with Clifford at the book fair.

“As of Wednesday afternoon, we had sold $1,080, so I feel confident that we’ll reach our goal,” Allen said. “It’s been going really well, especially since it’s our first book fair.”

She added that the fair has been bringing in new faces to the library.

“I think Clifford being here has helped bring in some new children, and we’ve also had a lot of grandparents coming in and buying books for their grandchildren,” she said. “July is usually a really slow month for us, but we’ve been able to bring in more traffic this week.”

Allen said she thought July was a good time to hold a book fair because it doesn’t compete with the schools or anything else going on around town.

“Demopolis doesn’t have a book fair, so this gives people an opportunity to buy some books they haven’t seen before,” she said. “We have a lot of books that are newer and we don’t have in the library yet. I think it’s also increased our circulation this week because people have come in for the book fair and also checked out some books from the library. It’s has allowed the library to be more visible in the community.”

In addition to the book fair this week, DPL is also working on having a “Little Free Library” built to put out at Foscue Park.

The “Little Free Library” is a box of books that people can take a book to read and leave a book in return.

“We’ve seen them used in other places and really like the idea,” Allen said. “Mark Riffe is going to build our first one, and we’ll put it out at Foscue Park. We’ll see how that one works out and go from there. I hope we can have four or five around town.”

She added that the program is especially helpful for people that can’t make it to the library during their operating hours.

“People can go to one of the boxes and grab a book,” she said. “I think it would help the library more than hurt it to have a few of these around town.”