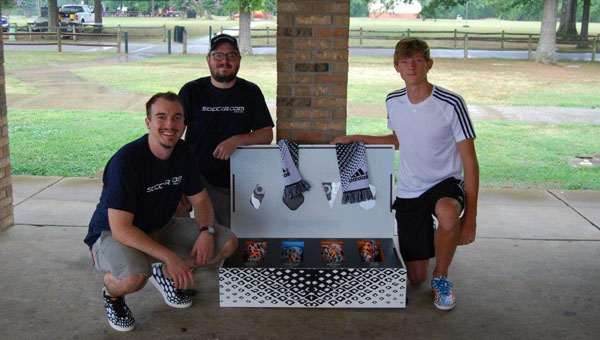 Brooker won Soccer.com’s #allin or nothing Battle Pack Photo Contest that ran from July 2-6. The contest required a photo to be submitted on Twitter or Instagram of one of five pairs of cleats.

“I saw a post from Soccer.com on Instagram about a photo contest to win a pack of cleats,” Brooker said. “I figured I would enter and try to win something I was probably going to buy anyway.” 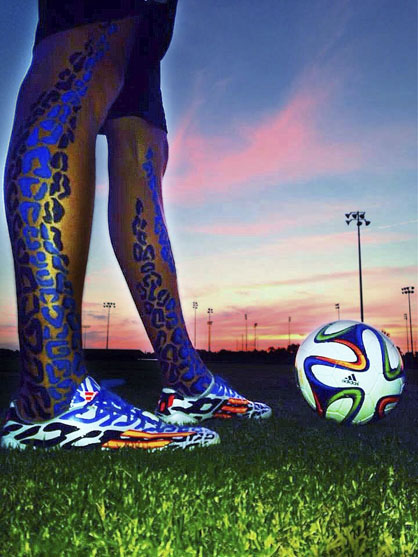 Brooker said he came up with the idea for the photo and enlisted the help of his uncle, Kirk Brooker, to paint a design on his leg for it.

“I knew I wanted to take the photo at sunset, so I went out to the SportsPlex, and it ended up coming out really good,” he said. “In one of Soccer.com’s magazines, they did a hologram of the design of the cleat on a player’s face, so I wanted to do something similar. Their slogan for the shoes is ‘Become the Predator,’ so I wanted to go with that theme. I continued the predator design of the cleat up my leg to continue the theme.”

He added that after the first couple of days of the contest, he had seen the entries into the contest and thought his photo might be good enough to win.

“On the last couple of days, there were a lot more entries, and they were getting better and better, so I got really nervous,” he said. “I posted mine on the last day so no one would take the idea. After seeing the other entries, I felt like my chances were slimmer.”

Then, two days after the contest ended, he got a call saying he had won.

“I was really excited,” he said. “I usually don’t win stuff like this.”

Brooker met representatives from Soccer.com in Tuscaloosa last week to receive the trunk with his new cleats.

“I can’t wait to wear them during the season,” he said.

Brooker plays for Demopolis High School, and he said he plans to play with Demopolis Elite Soccer outside the high school season.