BY JUDY ETHERIDGE | Special to The Times

By George, there it is again. That subject. Marriage. Weddings. Does anybody really know what’s going on?

Meet James Robinson, cast as George, sidekick to and keyboard player for Robbie Hart in the Canebrake Players’ upcoming production of “The Wedding Singer.” Robinson will be performing in his second Canebrake production. 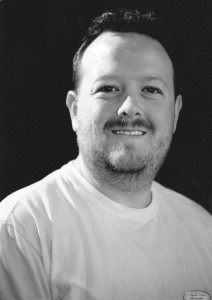 Robinson works at Anderson Family Medicine in Livingston. He is a family physician who also specializes in sports medicine and serves as team physician for the University of West Alabama, Sumter Academy and Demopolis High School. He is and has been involved in sports all his life, playing soccer and volleyball in high school and tennis while in college.

Robinson states athletes are such a motivated and hard-working group and he enjoys helping them get back to competition.

Robinson said he has always enjoyed musical theater. He attended Huntingdon College, a small school in Montgomery, where he was able to explore other interests outside his major. His interest in theater started his freshman year and he was hooked. His first play at Huntingdon was “Chorus Line,” which was most interesting since he had never taken dance.

His favorite play was “Cabaret” at Huntingdon, and Max was his character.

“It was such a great show and the cast and direction was so amazing,” he said.

He also played Harry in “A Man Like Marlowe.”

“Phantom of the Opera ” was the first Broadway show Robinson saw, and it remains his favorite. His favorite theater experience has been seeing Dame Judi Dench perform with the Royal Shakespeare Company at Stratford-upon-Avon in “All’s Well that Ends Well.

Robinson’s first part with the Canebrake Players was as Captain Tempest in “Return to the Forbidden Planet,” under the direction of Laurie Willingham.

He sings in the choir at Livingston United Methodist Church where Deborah Ezell Truelove is his choir director. She told him about Canebrake and auditions for “Forbidden Planet.” He thought the cast great and so much fun with which to work.

Truelove is also the Music Director for “The Wedding Singer.”

Director Kirk Brooker did not release his play selection until actual auditions; only to bring ’80s music. Robinson states this was a first for him; however, he had such a great time working with Canebrake previously, he knew he wanted to audition for the musical.

Robinson said this is probably his most challenging role to date. Playing George is way out of his comfort zone and that is what is the most fun for him.

“If you had asked me at auditions which role I wanted least, I probably would have chosen this one. Now, I am extremely excited about it and definitely would not want to trade,” Robinson said.

Robinson’s audience will get to see this self-proclaimed Broadway junkie rockin’ to the 80s as he treads the boards with the Canebrake Players in “The Wedding Singer,” Aug. 1, 2, 3 and 4 at the Old School on Main.

Evening performances at 7 p.m. on Friday, Saturday and Monday, and Sunday matinee at 2 p.m. Tickets are $10 adults and $7 students.