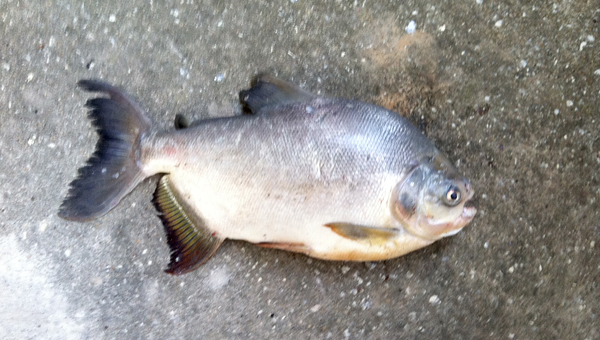 This 3-pound pacu was caught Saturday on Demopolis Lake.

A South American fish related to the piranha was caught Saturday on Demopolis Lake.

The 3-pound pacu was caught from the river bank at the Demopolis Yacht Basin by 13-year-old Houston Honeycutt.

Pacu is the common name given to several species of omnivorous South American freshwater fish. While similar to its cousin the piranha, there are some noticeable differences between the two species.

Piranha have pointed, razor-sharp teeth with a pronounced underbite, whereas pacu have squarer, straighter teeth like a human.

Pacu also grow to be much larger — an adult can be 3-feet long and weigh 55 pounds. The largest species of piranha weigh a quarter of that.

Honeycutt caught the pacu while fishing with his dad, Chris, who works at the Greene County Steam Plant. They had been fishing for catfish using chicken livers as bait. 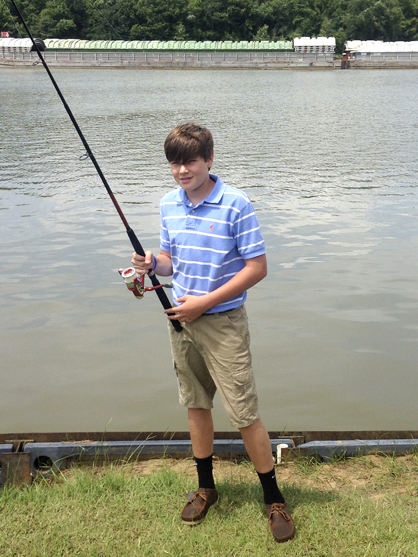 The Honeycutts called in their catch to the the Alabama Department of Conservation and Natural Resources. A game warden told them it probably belonged to a pet owner before being released into the river.

Pacu have entered the U.S. through the aquarium trade when people think or are told they are buying a piranha.

The fish continues to grow despite the tank size. When it outgrows the aquarium, many pacu end up dumped into rivers and lakes by well-intending pet owners.

Pacu have been found in 30 states and as far north as Michigan and Minnesota. Being a tropical fish, northern winters will kill pacu but there is some debate about their ability to survive in southern climates.

Brandon Smith, a biologist with the U.S. Army Corps of Engineers, said he’s heard of one report of a pacu being caught in Sumter County but hasn’t otherwise dealt with the fish.

Like any non-native, invasive species, Smith warns people about the dangers of releasing the fish into the wild, which is also illegal.

“All things like this we have to be careful of, to not introduce anything we can’t control,” Smith said.

The state has already lost the battle against many invasive species like fire ants, kudzu and cogongrass, Smith said.

Non-native fish can outcompete native species for food and habitat and can introduce exotic parasites and diseases, according to the Alabama Wildlife and Freshwater Fisheries Division.

The division recommends aquarium owners with overgrown or unwanted fish to do the following:

•Contact your pet retailer for a possible return or exchange.

•Give or trade with other aquarium owner.

•Contact veterinarian or pet retailer about advice on humane disposal.

•If you cannot find a home for your fish, bury them. Dump the water into the toilet or yard, far away from storm drains.