Alabama SAF-T-Net is a service that has been available in different formats since 2002, but it’s now expanding into new technology.

The service was started by Baron Services out of Huntsville in 2002 to send severe weather updates by text message, phone call or email. Now, Baron has created the SAF-T-Net app for smart phones that will push severe weather notifications to mobile users.

“After the April 27, 2011, tornado outbreak, Gov. Robert Bentley formed the Alabama Tornado Recovery Action Council,” said Steve Turner, National Director of Governmental Operations for Baron Services. “We developed the app as a result of that.” 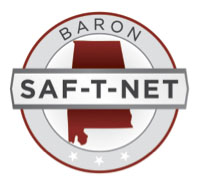 The free app is a full-featured weather app that uses Baron’s technology to alert users of severe weather coming to their specific location.

He added that the SAF-T-Net system is meant to augment other systems.

“We want people to keep using whatever system they already rely on,” he said. “Whether it’s the TV, radio or weather sirens, we want our system to be used in addition to that. Our goal is to make people more aware. We want to help protect people and save lives.”

The Alabama SAF-T-Net app is available for Android and iPhone.