Andi Rogers Turberville is Holly, cousin and best friend of Julia. Holly is fickle. She is being wooed by Sammy. She gives him the cold shoulder and decides she should go out with Robbie but then decides that, despite his flaws, there is no other man who could replace Sammy, and so it goes. 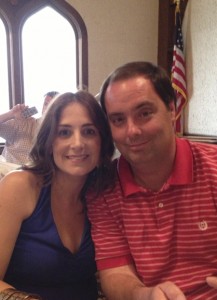 Andi Turberville is shown with her husband, Shane. She plays “Holly” in the Canebrake Players’ upcoming production of “The Wedding Singer.”

Turberville’s family consists of her one-of-a-kind husband Shane, four awesome kids, some cats, some fish and whatever else wanders up in their yard.

Turberville is the hospitality/culinary arts teacher at Demopolis High School.

Hospitality and tourism/culinary arts is a pathway all in its own, different from home economics which she taught last year.

The school recently received a grant that will transform her program. They will receive all new commercial equipment, and students will learn the “behind the scenes” of hospitality and restaurant management.

She enjoys watching her students learn things with which they can immediately connect and know that those objectives are not just school-related but life-related.

For example, learning how to correctly chop an onion and then use it to make a healthy veggie pizza is something students will take with them.

Once the “Bye Bye Birdie” audition schedule was announced, she thought, “I can do this. And so I did; now I am hooked.”

Her most recent and favorite play is “Return to the Forbidden Planet” because it was her first principle role and she really got to “play it up!”

Both characters are flirtatious and tend to go a little wild trying to “get the guy.”

Both Miranda, her Planet role, and Holly like to show the guy her dance moves.

“I love to dance. My ‘wild side’ easily comes out in this production, and it is so much fun getting to be wild and crazy on purpose,” she said.

In this role, she gets to follow in the footsteps of one of her favorite characters, Blanche Devereaux. She states, “the Golden Girls is my favorite.”

In addition to raising four wonderful kids and being involved in their hobbies, Turberville has some activities and accomplishments of her own.

She has always had a love of art. She loved to sketch as a child, and then after taking art classes in high school and college, realized she loved to paint.

After she got married, her mother taught her how to run a sewing machine and she began creating things ­— pillows, curtains, and eventually clothing and costumes for her children. She even learned to smock when her first girl came along.

Having four children lends itself to hundreds of opportunities to build and create.

She said, ”My dad can build anything and has helped me create some awesome things for the kids, including a stage, complete with curtains! I’m hoping they will love theater, too.”

Also, with four kids comes four birthdays a year. That is where her desire to make and decorate cakes originated.

She began making their cakes years ago, never taking a class. However, she learned that one can learn anything from YouTube.

Now she enjoys making cakes for family and some friends. She states, “It’s art! I would love to open a bakery in downtown Demopolis one day!”

Turberville taught herself to cut hair years ago and that has come in handy. Her husband hasn’t paid for a hair cut in 12 years nor have they paid to have the children’s hair cuts.

Turberville said,” Growing up in a household of many guitars and a piano, I was always around music. As previously stated, I love music.

“As an adult I have gradually become more confident in singing and playing a little piano. I joined my dad’s band several years ago where I sing, play some percussion, and occasionally, the keyboard. My rock star dad and I have even written a couple of songs together, inspired by real life.

“At church I sing in the praise team, where Drew Tucker leads. I also am part of the handbell choir under the direction of Gay Zodun. There’s a certain ‘zone’ I enter into when good music is playing it makes me happy.

“Last year, at the songwriter festival, I heard one of our very own, Tommy Vice, say, ‘music is part of my soul.’ I am in agreement with him 100 percent.”

When asked to share something people do not know about her, Andi relates that she is sensitive and emotional. Everything, happy or sad, makes her cry. She even remembers crying during Kermit the Frog and Miss Piggy’s wedding!

“All of my hobbies and activities do take time, and people ask how I do it all. I believe that people make time for their priorities. And I have an awesome husband who is behind everything I do and helps make them happen,” she said.

Turberville is indeed an active and busy young woman. Call it hobbies. Call it talent. Call it a boat load. She is blessed in many areas, and, it appears, is quite adept at prioritizing for maximum benefit to her family, friends and community.

Mark you calendar to see Andi Turberville, James Burden, Kelley Jordan, Drew Tucker, James Robinson and the entire cast of “The Wedding Singer” as they tread the boards at the Old School on Main. Show dates August 1,2 and 4 at 7 p.m., August 3 matinee at 2 p.m.

This show is not to be missed!