For the second year in a row, local drug task force agent Robbie Autery has been nominated for a national award.

Autery, an agent in the 17th Judicial Drug Task Force, is one of three finalists for the Interdiction Officer of the Year Award, which will be presented at the Motor Vehicle Criminal Interdiction Association/Drug Interdiction Assistance Program Conference in Grand Rapids, Mich., on Aug. 11-14.

“To be nominated, they look at your entire body of work,” 17th Judicial Drug Task Force Commander Clint Sumlin said. “He’s only been in interdiction for five or six years, but he averages more than $1 million in seizures per year plus all of the drugs he seizes. He also travels for six to eight weeks a year teaching other officers across the country how to do what he does.” 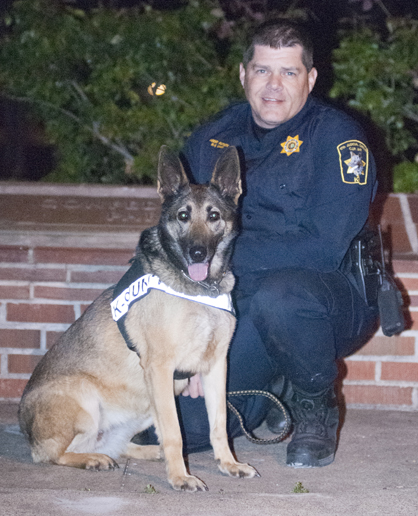 Robbie Autery, an agent with the 17th Judicial Drug Task Force, has been nominated for the Interdiction Officer of the Year Award, which will be presented at the Motor Vehicle Criminal Interdiction Association/Drug Interdiction Assistance Program Conference in Grand Rapids, Mich., on Aug. 11-14. He is shown with his K-9, Suza.

At the conference, Autery will be a speaker during different seminars.

Sumlin said having him nominated is an honor for the Task Force.

“It’s good to have him nominated,” he said. “We all put in a lot of extra hours, but he works extra hard every day. He loves what he does. He knows that by catching smugglers on the interstate, it stops it before it gets to the distribution point. And when he stops someone coming the other way with money, he’s taking the profit away. He also loves educating law enforcement in this area and others about how to do what he does.”

He added that Autery’s hard work and dedication led to his nomination.

“When he’s recognized by his peers from around the nation as a top-three interdiction officer in the country, it’s an honor for him and us,” Sumlin said. “For him to be nominated two years in a row is exceptional. He dedicates his life to it.”

Autery’s specialization in interdiction is finding hidden compartments in vehicles during traffic stops.

“Most officers won’t find what he’s able to,” Sumlin said. “He can notice the most minute detail being off and will end up finding something. His work ethic is second to none and he’s very knowledgeable about his work.”

Autery began his career in law enforcement in 2003 with the Chilton County Sheriff’s Department as a Sheriff reserve. He enrolled into the police academy and graduated in March of 2005 and went to work full-time as a patrol deputy.

He served there until 2007 when he joined the Alabama Department of Public Safety as a State Trooper working routine patrol. In 2008, he accepted the responsibility as a narcotic K-9 handler and in 2009 was selected to be a member of the State Trooper’s Felony Apprehension Patrol Unit.

Autery and his K-9, Suza, led the state of Alabama in total seizures in 2009, 2010 and 2012. He has had prosecution success in federal drug trafficking and conspiracy cases in the northern, middle and southern districts of Alabama.

In June of 2013, he left the Alabama State Troopers for the 17th Judicial Drug Task Force.