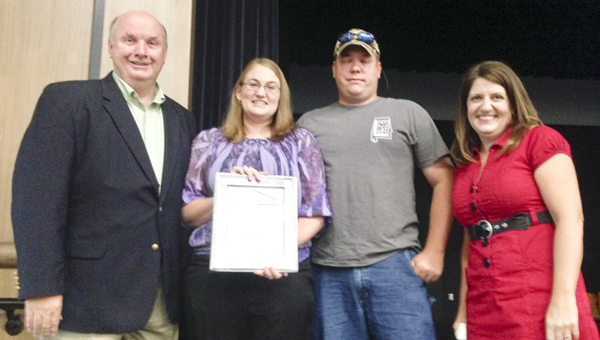 Ashley Brock, a science teacher at Demopolis Middle School, is the 2014 winner of an annual award given by the Demopolis City Schools Foundation.

Brock learned Wednesday that she received this year’s Hugh A. Lloyd Excellence in Education Award.

The honor is given annually to a teacher who shows commitment to the Foundation’s mission of fostering and promoting excellence in the school system.

The winner is chosen from among teachers who received

classroom grants from the Foundation the previous year.

The Foundation’s grants committee votes on the winner after reviewing reports teachers submit each spring detailing the impact grants made in classrooms.

The award comes with an additional $1,000 classroom grant that can be used at the teacher’s discretion.

Brock’s grant helped get the middle school’s robotics program up and running.

“This program won numerous awards at BEST Robotics competitions this winter and truly promoted excellence in the school and across the community,” said Amanda Barnes, DCSF executive director. “She is the perfect example of what we want our classroom grants to accomplish.” 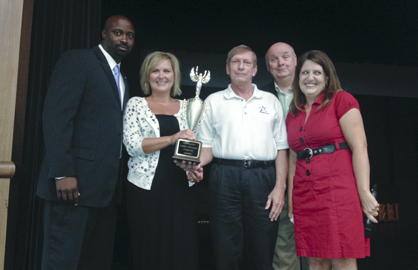 Barnes also gave a trophy to the school that raised the most money during May’s SchoolFest. This year, Westside Elementary captured the prize for the first time since 2007 as well as $1,000 grant for the school.

Foundation supporters have been calling 2014 a “million-dollar” year.

Once grants are awarded this fall, the Foundation will have put more than $1 million into Demopolis classroom in its 21-year history.

The Foundation is also approximately $80,000 shy of reaching a $1 million endowment.

“This town is so behind Demopolis public education. They are so supportive,” Barnes said.

She also thanked outgoing DCSF president John Northcutt for his service the past year six. Sarah Chandler Hallmark will step into that role later this year.