The team of 10 competitors, ranging from age 5 to 18, brought home a total of 18 medals from the gi and no gi grappling competition hosted annually by NAGA. 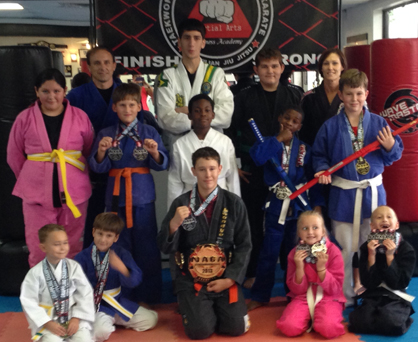 “Usually we take a pretty big adult team to this event, but this year we had a lot of kids in our junior Brazilian jiu-jitsu program who wanted to compete,” Ross MA instructor Jay Russell said. “For many of them, it was their first time competing at such a large tournament, but they all performed like seasoned veterans.”

Russell explained that gi grappling is Brazilian jiu jitsu competition while wearing a thick uniform. During this type of combat, competitors may use the uniform to take down, pin or even submit their opponents. No gi grappling involves most of the same techniques and strategies, except competitors wear shorts and compression shirts and may not grab or use their opponents clothing.

Russell said Schroeder claimed his fourth NAGA championship belt with his win in the gi division. He added that all other competitors who won first places received Georgia State Champion patches and gold medals or samurai swords.

“We were all especially proud of Tristen Fitz-Gerald,” Russell said. “Tristen was our only adult competitor for the day, and it was his first time competing in a very tough adult intermediate division. However, he helped us coach the kids all morning and then stepped up to grapple when his division was called.”

“These kids really got out on the mats and gave it all they had,” Russell said. “I’m proud of each and every one of them because they all faced their individual challenges head-on.”

The team at Ross Martial Arts Academy, located at 1014 Highway 80 East in Demopolis, will spend the next few months adding to their physical conditioning, refining techniques and competing in a few in-state grappling tournaments to prepare for the U.S. National Championships which will be held for the first time ever in Alabama on Oct. 18.