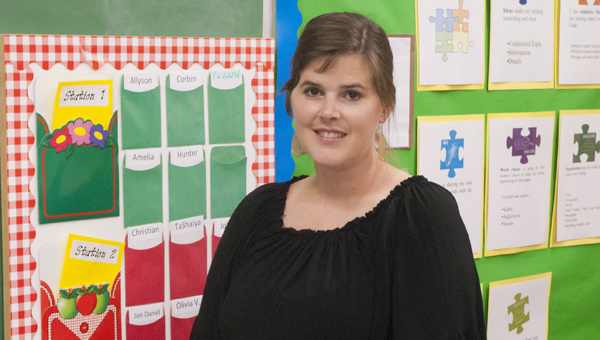 Amanda Harrison is back in her classroom after missing all of last year. In late June 2013, she was diagnosed with encephalitis. She was cleared to return to work at the end of July.

A little more than a year after Amanda Harrison was diagnosed with encephalitis, the Westside Elementary teacher is back in the classroom.

She was diagnosed with the encephalitis, or inflammation of the brain, in late June 2013. She had surgery to reduce the swelling and has been working to recover the past 12 months.

“It’s been a rough year,” she said. “After spending three months in the hospital, I had physical therapy three times a week and speech therapy the other two days. There were also trips to Birmingham at least once a month to see the doctor.”

She added that she wasn’t sure if she was going to be able to return to teaching this year.

“We weren’t sure if they were going to let me come back, but they released me at the end of July,” she said. “I was so excited when they told me that. I told my husband I could have kissed that doctor that day. I’m not a stay-at-home kind of person. I’m glad I’m finally able to come back. It felt like forever.”

Harrison said her biggest motivation throughout the year was her family.

“I was in the hospital and away from my children for three months, and even when I was back home, I really couldn’t do much with them for a while,” she said. “I knew I had to provide for my children, so I was going to do whatever I had to do to get back.”

Throughout the year, she received an outpouring of support from people in the community and across the state. In Demopolis, children raised money from lemonade stands to help family, restaurants donated proceeds and people voiced steady support through social media.

“I’m so grateful for everything,” she said. “We could never express how thankful we are for everything people did. That was my 10th year of teaching, and that was the year I was going to be vested with the state. I didn’t have that many days to miss, but teachers from our school system and others donated days so I could be vested. We’re very lucky to have a town like we have.”

Westside Elementary School principal Tony Pittman said everyone at the school is glad to have Harrison back.

“We’re so glad she was able to come back,” Pittman said. “It was great to see how all our teachers rallied behind her. We’re a big family here.”

Even though Harrison was determined to make it back to work, there were times that she wasn’t sure it was possible.

“At first, I didn’t see me being able to recover the way I have,” she said. “The more I worked, though, the stronger I became, and I could tell I had a chance to come back. Every time we went to see my neurologist, he would say I’m his miracle patient because I’m the first one he’s had to make this strong of a recovery. God has been good to me.”

She added that she’s ready to get back into a normal routine.

“I’m looking forward to getting back in the classroom and teaching young children,” she said. “It will be nice to be back with my friends and coworkers at school. It will be good to get back into a routine.”