“Even as a child,” Brown said. 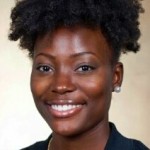 To make a positive impact in children’s lives and communities in the state, Brown, a senior in The University of Alabama’s Honors College, chose social work as her major. And unlike the majority of undergraduate social work students, she’ll get a head start in her desired field: medical social work.

They begin their internship on Aug. 20 and will remain in Washington D.C. for the fall semester.

The students will live in the Washington, D.C., metro area and will gain valuable experience in social work administration, advocacy and direct service at the largest military treatment facility in the world.

“I’m really excited about the culture shock,” said Brown. “I’m a Southern girl, so the thought of living and working in a metropolitan area is exciting. Just to be around so many people with that much professional experience, and working in a military hospital – it’ll push me and prepare me for what’s to come.”

The students were interviewed and selected from a pool of 25 honors/honors eligible students by UA faculty members Drs. Javonda Williams and Debra Nelson-Gardell, and Carroll Phelps, instructor and coordinator of the school’s Washington, D.C., MSW Internship program, now in its 35th year.

Additionally, officials from Walter Reed interviewed each student via telephone and conducted thorough security checks before granting each student clearance to the hospital.

The school began its honors program in the spring and is open to undergraduates in UA’s Honors College who are majoring in social work.

“These students had to have a track record of academic excellence and an aptitude to do more,” Williams said. “It’s been great to experience the uptick in students who’ve been accepted into the honors program.”

Phelps said she was contacted in February by Walter Reed officials about the idea of starting a BSW internship program at the hospital.

“That says so much about what our MSW students have done in the past,” Phelps said. “They said to us, ‘your students are just so well prepared.’ We’re honored to have been chosen, especially with so many choices in the D.C. metro area to form this partnership.”

The undergraduate placement will differ from the MSW program’s semester-long stay in Washington, D.C., in that the school’s undergrads will experience a “generalist” placement. MSW students of the past and spring 2015 work at more than a dozen social service agencies which prepare them both personally and professionally by exposing them to cutting edge direct service programs, as well as policy and advocacy implementation.

“I love the idea of having the ‘always on your toes’ feeling of working in a hospital,” Brown said.

Phelps said students will be challenged at Walter Reed, particularly by the sometimes intensive nature of working directly with clients and families in crisis.

“They’ll have a lot of client work, and some with service members who just left the battlefield,” Phelps said. “But we’ve set up a rotational placement for the students, so they will get a variety of experiences, which include all areas of medical social work as well as service learning opportunities. I will also teach our field seminar for BSW students in D.C., which will incorporate policy and advocacy through attending Supreme Court oral arguments, meetings with Representative Terri Sewell on Capitol Hill and speakers from the Executive branch, and having a tour of the Holocaust Museum by a survivor.”