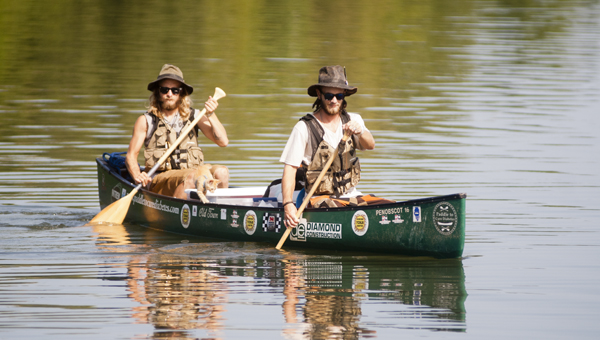 Peter Stadalsky, Nolan McClelland and Tom, their cat, are canoeing from Bryson City, N.C., to Mobile during their “Paddle to Cure Diabetes.” Their goal is to raise $10,000 for the American Diabetes Association.

When it comes to raising money for different causes, people have different ways of going about it.

Recently, there has been a wave of “Ice Bucket Challenges” going around social media to raise money for ALS, or Lou Gehrig’s Disease. Since the end of June, two men from Aurora, Ill., have been on their own campaign, canoeing to raise money for the American Diabetes Association.

McClelland said both his and Stadalsky’s fathers are Type 1 diabetic, and they wanted to do something to help raise money and awareness for the disease. Their fundraising goal for the journey was $10,000, and with 13 days to go, they were a little more than $100 from reaching that goal.

“When we started, we really didn’t think we’d get to the $10,000 mark,” McClelland said. “We kind of just threw a number out there of what we hoped to raise. This trip has far exceeded our expectations.”

Stadalsky said most people who embark on this kind of trip have had plenty of experience with canoeing, but neither one of them did at the beginning of theirs.

“Neither one of us had ever canoed before this trip,” Stadalky said. “We’re learning as we go. We planned for about six months before the trip with planning out our maps and picking out a canoe. We knew it would be a challenge, but we really didn’t know where those challenges would be. It’s been an incredible experience.”

The paddling duo landed in Demopolis on Tuesday evening around 7:30 p.m. and planned to continue South on Wednesday afternoon after cleaning their gear and resting.

“It’s more of a psychological challenge than a physical one,” McClelland said. “We got used to the physical part after just a few days, but there’s always times that you struggle with it mentally.”

They said their most difficult challenges have come from weather, sickness and portages where they’ve had to carry their gear around a dam.

“We’ve both battled with dehydration and heat exhaustion, but Pete got really sick when we were going through Mississippi,” McClelland said. “We’ve also had some tough portages. Some of the portage trails we’ve encountered weren’t trails at all.”

Stadalsky came down with a stomach virus that kept them in Columbus, Miss., for a couple extra days.

Not long after the duo reached the Tombigbee River, they picked up an unlikely companion.

“We were paddling down the Tombigbee and heard a cat near the bank,” Stadalsky said. “We paddled over to it to give it some food, but it wasn’t interested. It ended up jumping in the water and coming to us. Nolan picked him up with his paddle and put him back on shore, but he came right back to us, so we let him come aboard.”

Now the kitten, named Tom after the Tombigbee, travels with them.

“He sits in the canoe and enjoys the scenery like we do,” McClelland said. “When we stop at night, he runs around the camp for a little while until we get in our hammocks, then he climbs in with one of us and goes to sleep.”

Stadalsky said one of the scarier parts of the trip so far was being shot at near Columbus, Miss. He said when he was so sick, they were paddling up to a dock when a bullet flew past into the bank behind them.

“I guess he didn’t like us coming around to his dock,” Stadalsky said. “We pulled up to the wrong dock that day. Other than that, though, we’ve been treated with true southern hospitality.”

They both said their favorite part of the trip has been the slow pace. They travel at a pace of three miles per hour and travel about 25 miles each day. The day they landed in Demopolis was their longest day, as they traveled more than 30 miles from Epes to Demopolis.

“We have time to look around and digest everything that we see,” McClelland said. “It’s nice to be able to disconnect from everything back home and just enjoy being outside. It’s fast-paced back home, and it’s nice to slow down.”

The duo made it to Demopolis on the 57th day of their 70-day journey. They have a GPS tracker with them, and they can be followed on their website, www.paddletocurediabetes.com. On their site, there are links to donate to their cause as well as a link to their Facebook page for more updates on the trip.