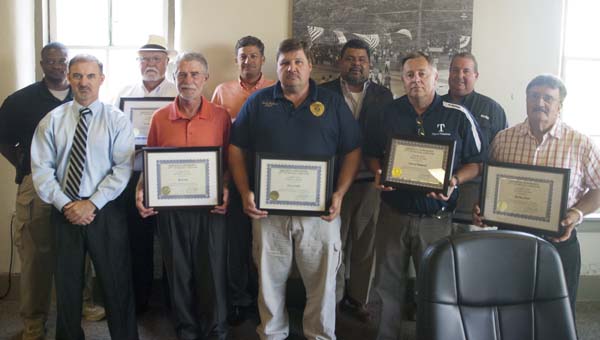 The 17th Judicial Circuit Drug Task Force is in its third year of working to keep drugs out of Marengo, Sumter and Greene counties.

District Attorney Greg Griggers welcomed supporters to his office on Washington Street in Demopolis on Thursday for a luncheon to recognize them for helping the task force since it began.

“When we started in 2011, we needed an agency focused on the drug problem in our area,” Griggers said. “The other agencies in Marengo, Sumter and Greene counties didn’t have the resources to commit to defeating the drug problem, so we started the task force.”

Griggers added that the first couple of years weren’t as easy as they could have been.

“We had kind of a rocky start after our first year,” he said. “Some things happened and we lost our ADECA grant, which helped us get off the ground in the first place. Those of you who are here today are the reason we made it through that next year.”

He added that the task force was able to get the ADECA grant back the next year, but the amount of the grant has gone down each year.

“We’re in a better position now than we ever have been before,” Griggers said. “We’re at a point where we could operate on our own if we needed to. I can’t thank our supporters enough because we wouldn’t be here without you. I hope what we do by keeping drugs out of our counties helps us repay you for all that you’ve done for us.”

Griggers and the task force recognized nine companies and individuals during the luncheon for their support, including Dr. Ronnie Chu, Ronnie O’Neal, Jay Reynolds, RockTenn, J.R. Rivas, Westervelt, Dr. Bobby Williams, the town of Thomaston and the city of Linden.