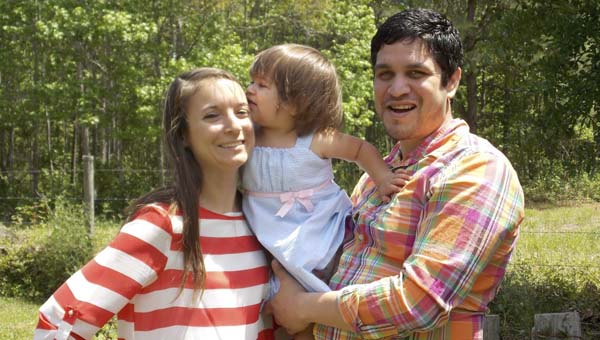 Kelsey Berlanga became the youth director at Demopolis First United Methodist Church at the end of July. She is shown with her daughter, Mikah, and husband, Monty.

Demopolis First United Methodist Church is expanding its youth ministries, thanks in large part to their new youth director.

Kelsey Berlanga moved to Demopolis at the end of July to take over the position at the church. She comes to the City of the People from Lake Charles, La., with her husband, Monty, and 2-year-old daughter, Mikah.

She said Demopolis FUMC pastor David Willis contacted her after coming across her resume.

“I had no clue about the city or the church when I came over here the first time,” Berlanga said. “I was definitely surprised by the town.”

She said the biggest transition was getting used to living in a small town.

“There isn’t quite as much to do here, but we’re getting used to it,” she said. “We go to Burger King a lot to give my 2-year-old a chance to play. We’re not big fans of playing outside in the summertime.”

Berlanga added that everyone around town and in the church has been welcoming to her and her family.

“When I got here, I made the theme of the youth building ‘Journey,’ and the Public Works Department donated signs for us to hang around the building,” she said. “The car dealership also helped me get a car, so everyone has been very helpful.”

Upon arrival, Berlanga started making changes to the church’s youth program, which is open to students in sixth through 12th grade. Some of the things she started include a Wednesday night Bible study, with classes for both middle school and high school students. In addition, she also implemented a Sunday night service for students.

“We’re working on rebuilding the youth program at the church,” she said. “We’ve got around 60 students, and I think that’s a good number. I think we’ll continue to grow as we add new things and have cool events.”

She has already planned a movie under the starts on Halloween, which will feature an older scary movie. There is also a lock-in planned for Friday, Nov. 21, and Berlanga said she hopes to do a ski trip in December.

Since she has been at the church, the youth went on a mission trip to Sautee, Ga., and there is one planned for Nashville, Tenn., for the near future.

“Mission trips are important because they allow us to serve others, and that helps us grow,” she said.