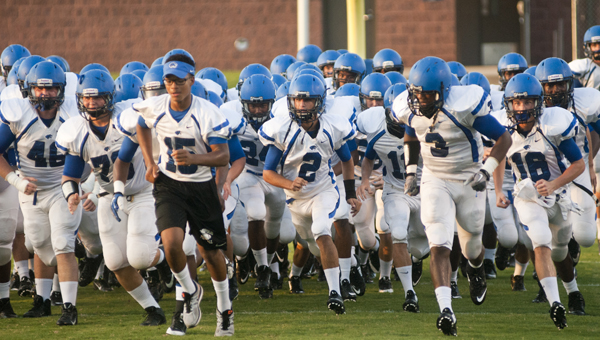 The Demopolis Tigers take the field for the first time in 2014.

He felt like the starters, on the other hand, came out flat in the game.

“Our twos played hard in the second half,” he said. “Those young guys went out there and fought. Our ones came out flat, though. We have to come out swinging, but we stood in the ring and waited for them to throw a punch. I was looking for effort and attitude tonight, and I didn’t see it. We have to change that by next Friday.” 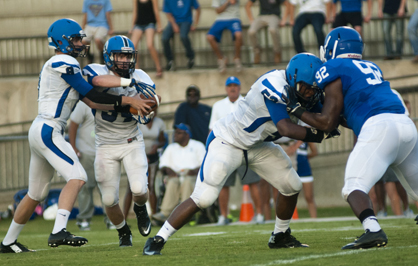 Tripp Perry reads the defense while handing off to Drew Jones.

Both teams started the game with three-and-out drives before Tuscaloosa County opened the scoring on an 8-yard touchdown run by Derrick Burns. The extra point was converted by Moises Carrasco, and the Wildcats held a 7-0 lead with 3:55 to play in the opening quarter.

On Demopolis’ next drive, starting quarterback Tripp Perry bobbled a handoff to Jayjerrin Craig that resulted in a fumble that was recovered by Tuscaloosa’s Rodney Bell. On the next play, TCHS quarterback Seth Franks hit Javel Bailey for a 33-yard touchdown pass. The extra point was no good, and the Wildcats led 13-0 with 3:30 to play in the first.

The teams traded possessions until the Wildcats scored again halfway through the second quarter. Franks connected with Eddie Williams Jr. for a 30-yard touchdown pass, and after another missed PAT, Tuscaloosa County led 19-0.

Demopolis answered on their next drive with Logan McVay in at quarterback for the Tigers. He connected with Ryan Schroeder to put the Tigers in Wildcats territory, then Rashad Lynch busted through a hole for a 30-yard scamper. Tyler Overstreet converted the extra point to make it 19-7 with 3:54 to play in the half. 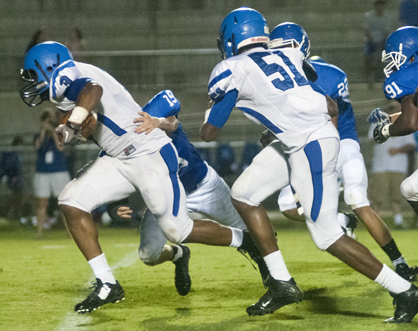 Rashad Lynch breaks a tackle on his way to a 30-yard touchdown run.

Demopolis’ defense forced a three-and-out, and their offense was moving down the field, but a McVay pass was picked off by Caleb Bonner, setting up a short scoring drive for the Wildcats. Franks found Chase Pearson for a 17-yard touchdown pass, giving Tuscaloosa County a 25-7 lead going into halftime.

“We had three or four plays we were capable of making in the first half that we didn’t make,” Causey said. “We had some dropped passes, a fumble and some missed reads. We also have to get off blocks quicker on defense.”

Despite only putting seven points on the board in the first half, the Tigers had 167 yards of offense, 100 of which were in the running game. Tuscaloosa County had 223 yards at halftime with 93 on the ground and 130 through the air. 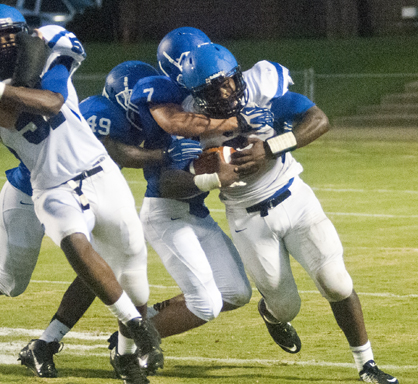 With the backups in after halftime, the Wildcats were able to score with 3:45 to play in the third quarter on a 23-yard run by Roe Wilson.

Demopolis scored their final touchdown of the night on a 3-yard touchdown run by Demetrius Davis.

Causey said his team was about where he thought they would be at this point.

“We’re right where I figured we’d be,” he said. “We need to come out with more energy next week.”

The Tigers will open their regular season slate next Friday night at home against rival Thomasville.