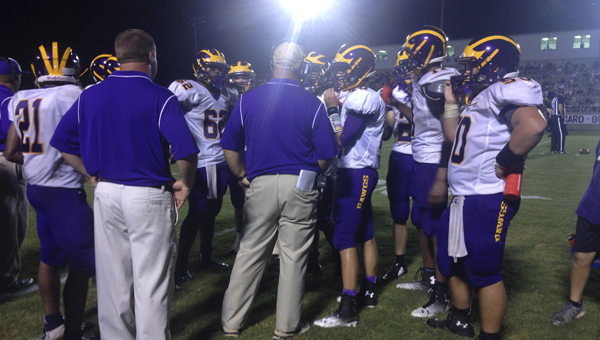 Sweet Water head coach Pat Thompson talks to his players during a timeout in Friday’s game against Thomasville.

Sweet Water, a 2A school, had the task of opening their season Friday at 4A Thomasville.

The Bulldogs would score first but ended up losing to the Tigers 24-6.

“I thought we were very physical at times,” said Sweet Water head coach Pat Thompson. “We didn’t maintain our drives.”

The Bulldogs got on the board first with a 1-yard quarterback keeper by Branson Davis.

Thomasville answered though with a drive of their own, capped by a 2-yard touchdown run from Alexander White.

The Tigers would score two more touchdowns in the first half on a 19-yard pass from Chadwick Bryant to Sammy Jackson and a 9-yard run by Wil Brasell.

Sweet Water had a chance late in the half to score but turned the ball over on downs after four plays from first and goal.

The Bulldogs did stop the Tigers on a goal line stand in the second half, keeping Thomasville out of the endzone despite them having the ball with first-and-goal at the 1-yard line.

Thomasville finished the night with 13 first downs. They had 236 yards rushing on 32 carries and were five-of-six passing for 63 yards and a touchdown.

The Bulldogs had 11 first downs and 98 yards on 43 carries. They threw the ball 13 times but only made two connections for 54 yards and gave up one interception.

Eric Jenkins had 57 yards and was helped with 36 more by Keldric Green and another 15 by Roy Rodgers.

Sweet Water is off next week and will travel to St. Luke’s in Week 3.