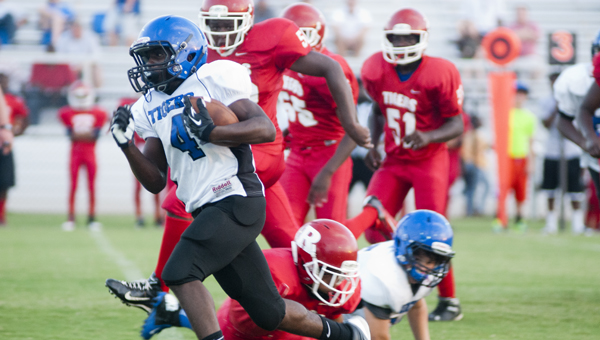 In addition to the Tigers, Riverside Middle School, Echols Middle School and Sweet Water also competed in the jamboree. There were four two-quarter games during the event.

Sweet Water and Echols were the first two teams to face off. Echols got the better of the Bulldogs in the contest, winning 22-0. Echols quarterback Landon Hall scored the first touchdown of the game on a sweep play on the first play from scrimmage.

The Wildcats added their second score of the game with 1:12 remaining in the first quarter on a 4-yard run by Darin Mackall. 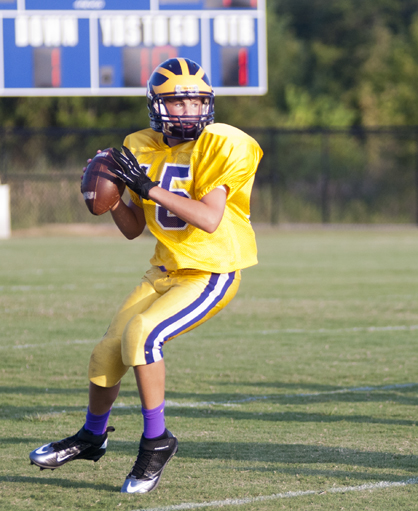 Echols’ final score of the game came with 3:35 to play on a 77-yard run by Devontae Wright.

In the second game of the night, DMS took on Riverside. Antonio Besteder put the home Tigers on top with a 50-yard touchdown scamper that gave DMS a 6-0 lead.

That score held until the final play of the game when Demopolis was attempting to run out the clock. A fumble was recovered by Riverside’s Maurice Henry, who sprinted 78 yards to tie the game as time expired. Riverside missed the two-point conversion, and the game ended in a 6-6 tie.

The third game of the night pitted Sweet Water against Riverside.

The Tigers took a 6-0 lead on a 6-yard run by Woodrow Washington with 1:17 to play in the first quarter.

Riverside quarterback John Williams connected with Tre Williams with just under three minutes to play to put his team on top 12-0.

Sweet Water responded, though, with a 20-yard touchdown run by Braiden Broussard to make the score 12-6, which held through the final whistle. Sweet Water ended their night with two losses while Riverside finished with a win and a tie.

In the final game of the night, Demopolis and Echols played to a 0-0 tie.

DMS head coach Jeremy Silcox said he saw what he wanted to out of his players in the jamboree.

“I wanted our guys to fight hard, and we wanted to see what they would do when faced with adversity,” he said. “We saw that tonight. We played against two good teams, and I’m pleased with the effort of our players.”

The Tigers will open the regular season at home on Tuesday, Sept. 5 against the Sweet Water Bulldogs.

“We need to fine tune our game and execute better going forward,” Silcox added. “It looked like the game still feels fast to us, and it will slow down for them as the season goes on. We’re a young team, and we’re going to continue improving.”