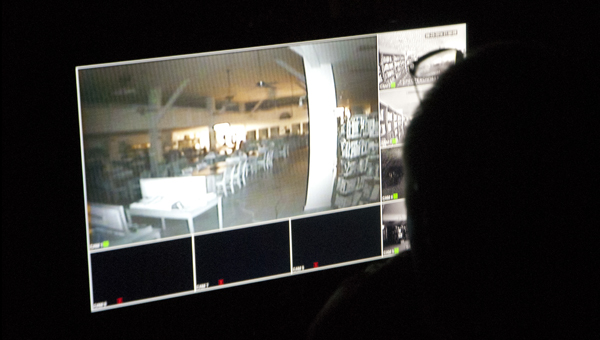 The Tuscaloosa Paranormal Research Group used infrared and ultraviolet cameras during their investigation at the Demopolis Public Library on Saturday.

Is something strange going on in your neighborhood?

Who are you going to call?

The Tuscaloosa Paranormal Research Group hopes you give them a try. For the 10-member team, investigating the supernatural comes naturally.

While they don’t promise to do any “ghost busting,” they can tell you if that cupboard slamming shut or light turn on is something easily explained or, maybe, otherworldly.

The group staked out Demopolis Public Library on Saturday night at the request of Library Director Morgan Allen, who learned about TPRG from a fellow librarian in the Auburn-Opelika area.

“She had gotten the group to do an adult program in the fall on what they had found there at the library and other investigators they’ve done in the past,” Allen said.

The downtown building that houses the library was built in 1924 and operated as Ulmer Furniture Store for decades. It’s been home to the library since 1987.

Unlike Gaineswood and some of the city’s other homes, the building doesn’t have a history of any haunting tales. 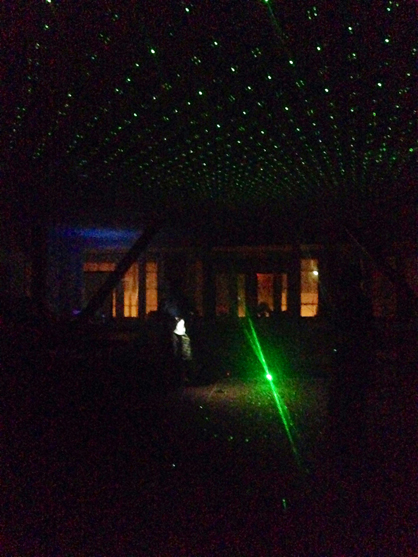 The team put a laser grid on the second story to better see in the dark.

However, like any older building, it has its creaks and quirks.

Allen said books have repeatedly fallen off shelves and employees hear what sounds like someone walking in the mezzanine. They have even called police after hours thinking someone was in the building.

Saturday’s investigation started with a simple walkthrough to scout out the building. Next came infrared cameras set up to try and capture a ghost’s presence.

While all of the cameras could see into infrared, a few pieces of equipment could record ultraviolet at the other end of the spectrum.

“It can help you have a better chance of catching something on tape,” said Scott McCloud, the group’s vice president and lead investigator.

“We try to be as scientific as a bunch of amateurs can be,” McCloud said. 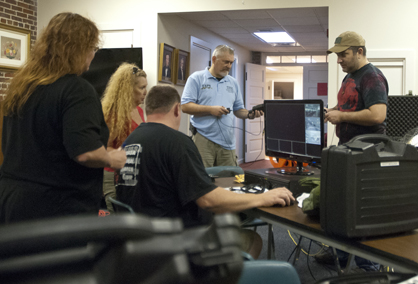 Group members work to set up their video equipment.

After setting up, the group turns off the lights and takes turns either watching the cameras or exploring the building.

Investigators wait in complete darkness hoping to get an orb on film or whisper on tape. They pose questions like “Is anyone here” or “What is your name?”

The team had a difficult time with equipment Saturday, particularly getting cameras and lights to work properly.

Every investigation is different and is sporadic in nature.

“It comes in waves. We get snowed under with legitimate cases and then go months with a drought,” McCloud said.

The team mostly lives in central Alabama and have various careers. McCloud works in heating and cooling, while Heather Boothe is employed by Druid City Hospital in Tuscaloosa.

“I’ve just always liked scary movies so I decided to join,” she said.

One of the team’s hunts in at the Tallassee Community Library was featured on Biography Channel’s “My Ghost Story.” The episode called “No Knocking in the Library” originally aired in October 2011.

The group investigates homes and businesses by invitation only free of charge. They won’t do graveyards or any place that would be disrespectful to the departed.

They will return to the library later this year to give a report of the investigation. The date and time will be printed in future editions of The Demopolis Times.

The books are available online and major book retailers.

For more about the group, visit tuscaloosaparanormal.com.