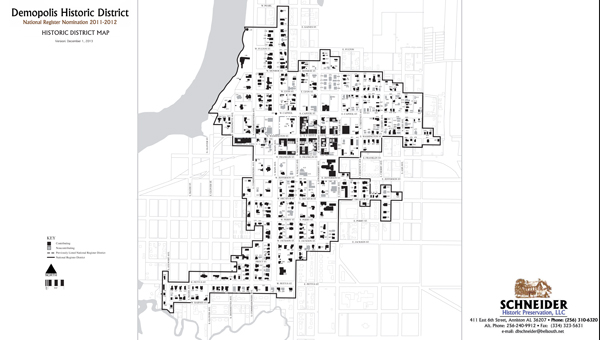 The commission will work this fall to get community member’s input on four possible districts.

The move comes after the city’s National Historic District was expanded beyond downtown businesses. The designation, while notable, is honorary and doesn’t include any guidelines on what homes and businesses can do to keep their historic appearance.

“Our plan is to try to sell this and promote why historic districts are important and why you need them,” said commission member Brian Brooker. “It’s past, history and character that exists no where else.”

Historic districts can lead to an increase in property values and tourism, Brooker said.

As part of expanding the city’s federal historic district, the commission had hundreds of properties individually surveyed by a consultant — a time consuming process.

The consultant, who was paid by grants, looked at some of Demopolis’ nicest homes and ones that are falling in on themselves.

“Dilapidated properties are contributing structures too. They tell a story of what lives were like in Demopolis,” Brooker said. “We don’t only have Gaineswood and Lyon Hall. It’s not just the best of the best houses that have our historic character — it’s a combination of all of them.”

Local historic districts would not have to follow the same guidelines, which were set by the National Park Service. For example, Morning Star Baptist Church didn’t make the federal district because of its distance from other contributing properties. A local district would be able to include it.

All local districts would have to be approved by the Demopolis City Council. The council would also set any guidelines on what property owners can and cannot do in these districts.

District guidelines in Alabama vary widely from open to as detailed as what exterior paint colors are allowed.

When a property owner applies for a building permit, they would have to meet the historic district guidelines as well as building codes.

The commission would like to see four districts between the canal and the river, including a River District, Town District, Church District and Old School District.

In time, they would also like to see one “endangered” property in each of those districts saved and preserved possibly even for public use.

While there are possible tax incentives for businesses that preserve property in the district, those benefits don’t extend to homes.

The commission will announce town hall meetings later this fall for all four districts. Those dates and times will be published in future editions of The Demopolis Times.