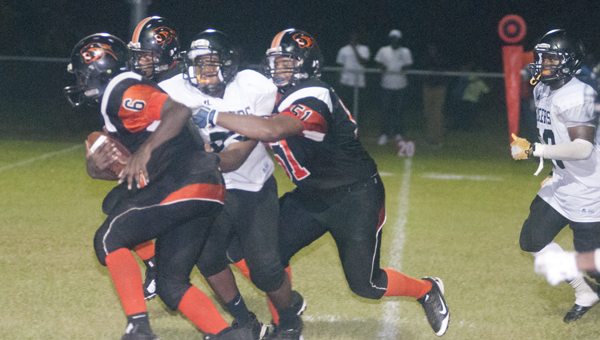 Travarious Harris breaks through the line for Marengo against Choctaw County. Harris ran for three touchdowns in Thursday night’s game.

The Marengo Panthers relied heavily on their run game Thursday night, leading them to a 41-6 win over the Choctaw County Tigers to open the season.

Travarious Harris, a sophomore fullback for the Panthers, led the way with three touchdown runs.

For first-year MHS head coach Bernard Myrthil, getting his first win as a head coach against his former school where he was head coach was an emotional feat.

“This is a burden off my shoulders,” he said. “It’s bittersweet coming against my former team, but I’m glad we got the win.”

The only touchdown the Panthers gave up Thursday was on a 90-yard kickoff return by Choctaw County’s Tommy Hooper in the third quarter. Other than that, Marengo controlled the tempo of the game from start to finish. 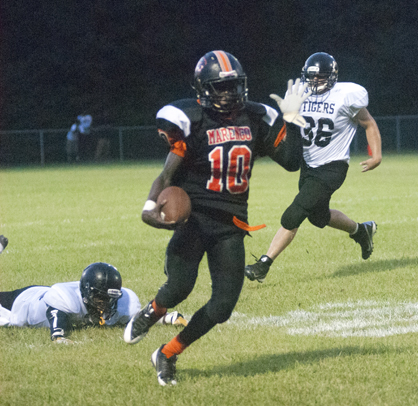 The Panthers opened scoring with three-and-a-half minutes to play in the first quarter on a 3-yard run by Harris. The extra point was no good, so Marengo took a 6-0 lead.

A sack by David Autery forced a fumble that was recovered by Shatavius Mitchell to give the Panthers the ball back in Tigers territory, but Marengo gave it right back on a fumble of their own.

The teams traded possessions until Marengo added their second TD of the game on a 15-yard pass from Cordarius Pritchett to Justice Irvin. Harris ran in the two-point conversion to give his team a 14-0 lead with 8:40 to play in the first half.

With 57 seconds to play in the half, Harris added his second rushing touchdown of the night on a 15-yard scamper. He also converted the two-point conversion to give his Panthers a 22-0 halftime lead.

In the third quarter, Harris continued to pad his stats for the game. On the defensive side of the ball, he intercepted a pass from the Tigers then finished the ensuing drive with a 3-yard TD run halfway through the third quarter. The extra point was no good, and the Panthers led 28-0. 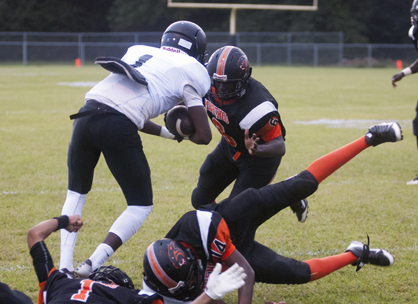 Travarious Harris comes in to make a tackle on a Choctaw County ball-carrier.

Choctaw County scored their only points of the game on the next kickoff.

“We gave up the touchdown on special teams, and I was pretty upset with that,” Myrthil said. “We’ve got some things we need to work on in that area.”

At the start of the fourth quarter, the Panthers had driven the ball down inside the Tigers 10 yard line. Calvin Ferguson capped off the drive from a yard out to put his team on top 34-6.

Marengo added their final score of the game on a 15-yard scramble by Irvin, who had taken over at quarterback for Pritchett. The extra point was converted, giving the Panthers the 41-6 lead.

Next week, Marengo will travel to Fruitdale to open region play.

“We did what we wanted to do tonight running the ball, which helped open up the passing game for us,” Myrthil said. “We’re going to celebrate the win tonight then get ready for region play. We’ve got to go break down film and get ready for Fruitdale.”