‘Battle of the Tigers’ goes to Thomasville 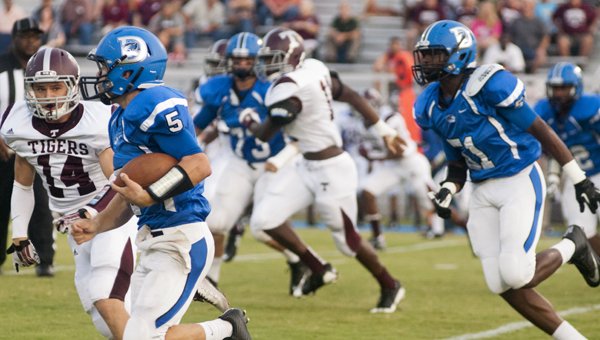 The Battle of the Tigers between Demopolis and Thomasville lived up to its reputation of being a physical game Friday night at Tiger Stadium in Demopolis.

Demopolis wasn’t able to take advantage of their home field and fell to their rivals 18-14.

“We had too many missed assignments, and we mishandled the ball a few times,” DHS head coach Tom Causey said. “We’ve got to do a better job of making the routine plays. It was a hard fought ballgame, but we had some missed opportunities. Thomasville was able to make plays with the opportunities we gave them.”

Thomasville outgained Demopolis 312 yards to 170 in the game, but Demopolis was never out of it.

Demopolis got on the scoreboard first on their second drive of the game. Jay Craig took a handoff from Logan McVay from 2 yards out for a score, and Tyler Overstreet converted the extra point to put Demopolis on top 7-0.

The touchdown was set up by a bad punt attempt by Thomasville in which Drew Jones and Travares Hall took down the punter before he could get the kick off at his own 5 yard line.

After trading possessions, Thomasville took over at their own 31 yard line. Trevor Wilson took a handoff and got through the defense for a 69-yard touchdown run. THS missed the extra point, leaving Demopolis with a one point lead late in the first quarter.

With nine minutes to play in the second quarter, Thomasville took the lead from Demopolis on a 5-yard TD run by Byran Hosea. They failed the two-point conversion, leaving themselves with a 12-7 lead.

Demopolis’ Rashad Lynch broke a run 55 yards for a score, but it was called back for holding. A couple plays later, Demopolis fumbled, giving Thomasville the ball back.

Neither team was able to capitalize on the other’s mistakes through the rest of the first half, and the 12-7 score held until the break.

In the third quarter, Demopolis drove down to Thomasville’s goal line, but a fumble in the endzone gave the visitors the ball back on the 20 yard line, ending the threat. Both teams held strong through the third quarter and the 12-7 score remained until the fourth quarter.

With 9:31 to play in the fourth quarter, Hosea scored again, this time from 23 yards out, to give Thomasville an 18-7 lead.

Demopolis went three-and-out on their next possession, then forced Thomasville into a turnover on downs. On the home team’s next drive, McVay connected with Seth Aiken for 34 yards to put Demopolis on the Thomasville 6 yard line. McVay finished off the drive from one yard out to bring Demopolis within four at 18-14 with 4:13 to play.

Thomasville was able to get two first downs on their next drive, ending the game.

“I’m proud of our guys for battling until the end,” Causey said. “They gave us a chance to win at the end.”

Defensively for Demopolis, Tyler Colburn led the way with 15 tackles, two for a loss, a forced fumble, a fumble recovery and a blocked kick.

Demopolis will open region play next Friday night on the road at Calera.