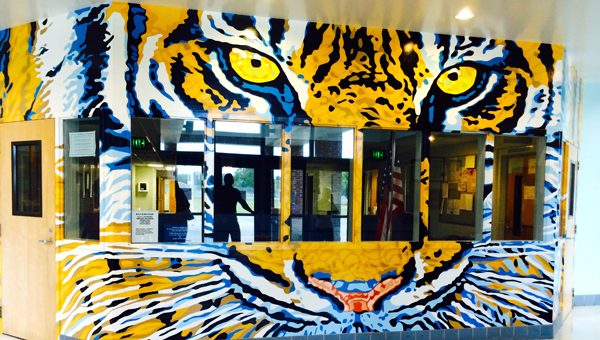 A new mural at Demopolis High School’s office was among the many highlights of Thursday’s tour.

The Demopolis Board of Education welcomed several guests Thursday evening as the Capital Planning Committee was presented with school improvements from the last four years.

The committee, consisting of community leaders in Demopolis, gathered to view improvements for the first time since 2010. After loading a bus, Demopolis City Schools Superintendent Al Griffin took the group on a tour of all four schools.

“We have maintained and done some significant upgrades that I think the committee will be impressed with,” Griffin said prior to the tour.

The tour began with Demopolis Middle School, led by Griffin and DMS principal Blaine Hathcock. There were many visible improvements to the campus including security computers, new air conditioning units and 125 lockers that were added within the year.

The committee was shown the newest technology additions to the middle school as well as a classroom with a smart board and compatible television. These additions were made possible because of the recent technology initiative, according to Griffin. 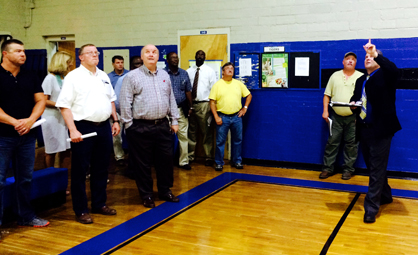 A computer lab that holds up to 20 students was also added to the school too. The lab is accessible for any student in grades 7 through 12 from both Demopolis Middle School and Demopolis High School.

“Because of this lab, we are able to serve every student in one place,” Hathcock said.

The committee tour proceeded with a drive to U.S. Jones Elementary where the committee was presented with new improvements on campus including lowered ceilings, LED lighting in the gym and new gravel parking and ramp for the special needs bus. The library was also improved with new paint and art created by the students themselves.

“A local artist took pieces the children actually made and turned them into a really nice piece of art for our library,” said Leon Clark, U.S. Jones principal.

According to Clark, he is happy with how the overall appearance of the school has progressed over the last few years. He hopes to continue this upgrade with a front entrance and awnings for the children.

Griffin, however, was most excited for the improved LED lighting in the gym. He spoke to the committee about how they save energy and money for the school system.

“These lights use 50 percent less energy and turn on immediately,” he said.

The tour then moved to Westside Elementary and began with discussions of plans to lower the ceilings this December. However, there were many new improvements to campus that principal Tony Pittman was happy to show the committee. These included new painting, a stage floor and curtain, and security cameras and phones.

There were 31 security cameras placed throughout the building, and Pittman can easily access them from his office. Security phones have also been placed all over campus that improve the safety of the school and the children. A new computer lab for the children was also added to the Westside Elementary campus this year.

“We wanted to make sure we gave each student the opportunity to visit the lab once or twice a week to do whichever activity he or she chooses,” Pittman said.

Lastly, the committee made their way to Demopolis High School where they were shown many new improvements to campus including speed bumps, geothermal projects, a tiger mural in the front office and an entirely renovated gym.

The Board of Education and principal Tony Speegle made the decision to upgrade the DHS gym this year with new bleachers, a new and varnished gym floor, and painting of the gym and weight rooms.

As the tour concluded, a proposal of a budget for the upcoming year was presented for the $202,979 that is available. Upgrades to the Demopolis High School track and tennis courts, as well as a new maintenance assistant, are on the books for 2015.

“The improvements we have done over the last few years effect the success of our schools because it provides the students with a comfortable learning environment,” Griffin said.

Griffin added that he would like to see any energy efficient projects that will save on labor and utilities in the future for Demopolis City Schools.

He discussed the possibility of putting LED lights in all light fixtures on each campus in the future. The LED lights at U.S. Jones gym have saved between $140 and $200 per month since their installation, according to Griffin.

“I would love to commend the Board for all of the improvements that have not only been made to Westside, but at all of the schools,” Pittman said. “We are so glad they put our children first.”