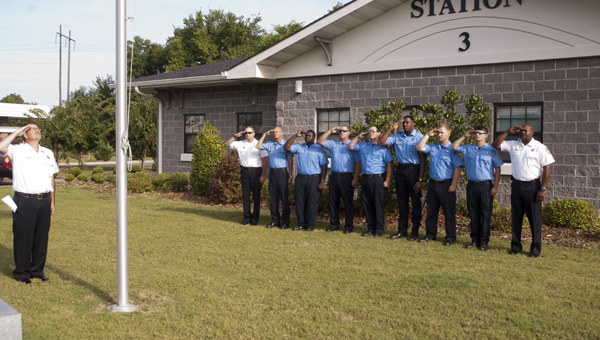 Members of the Demopolis Police Department lowered the American flag to half-mast and saluted during a moment of reflection.

“We had our honor guard lower the flag and present arms in memory of 9/11,” DPD Chief Tommie Reese said. “We want to remember all the firefighters, police officers, rescue workers, those on planes that day and those who went to war as a result of that day. We’re in a crucial time right now, and sometimes we take our freedom for granted. We wanted to take a moment this morning to reflect and remember the sacrifices made 13 years ago.” 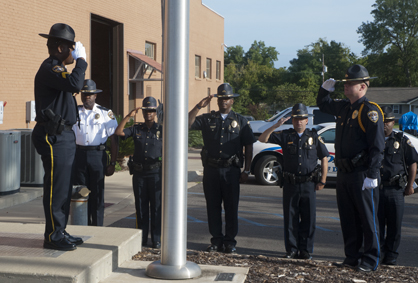 DFD Chief Tommy Tate asked the members of his department to honor a moment of silence at 8:46 a.m., the time when the first plane hit the World Trade Center tower.

Tate spoke to his men, detailing the events of Sept. 11, 2001, reminding them what their firefighter brothers went through in New York City.

“When you go into a fire, it’s always an unknown, and you always want to come home afterward,” Tate said. “I’m sure those guys that day had a bad, sinking feeling when they left to do their job that morning that some of them might not be coming home again. But because they were doing their jobs and what they were trained to do, I believe many people survived because of that.”

DFD Capt. James Bailey said he hopes people will always remember what happened on 9/11, much like people remember the events on Dec. 7, 1941, at Pearl Harbor.