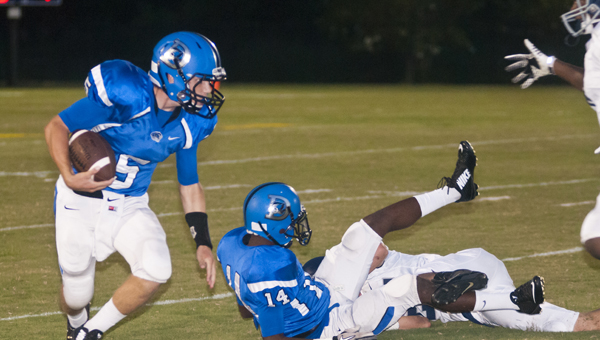 Demopolis quarterback Logan McVay looks for an open hole in Friday night’s win over Jemison. McVay ended the game as the Tigers’ leading rusher with 94 yards and two touchdowns on three carries.

“The defensive line played their tails off tonight, and we don’t expect anything less from that group,” DHS head coach Tom Causey said.

Jemison head coach Jacob Hogan said he was proud of his team’s effort throughout the game.

“Our guys played hard until the end,” he said. “Demopolis has a great squad and my hat’s off to them. They’re a class act. We have some issues we need to fill, and we can’t wait to get there.” 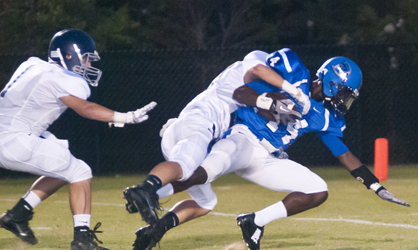 “Our offensive line was great tonight,” Causey added. “Jemison threw a good front at us, but we had practiced for it all week and were prepared. Those guys handled it great. And all of our backs and receivers ran hard after contact.”

Jemison opened the game with two possessions before Demopolis took a snap. After going three-and-out on their first drive, Ryan Schroeder mishandled a punt and the Panthers were able to recover the fumble. The Tiger defense forced another three-and-out to give the offense the ball.

On the Tigers’ first drive, a 36-yard completion from McVay to Antonio Mackins set Demopolis up in the red zone. Jones finished off the drive with a 5-yard run to give the Tigers a 7-0 lead.

Jemison’s biggest offensive play of the game came on the next drive on a pass from Kevin Nunn to Prentice-James Blue for 42 yards. The Tigers still managed to force a turnover on downs on the drive. 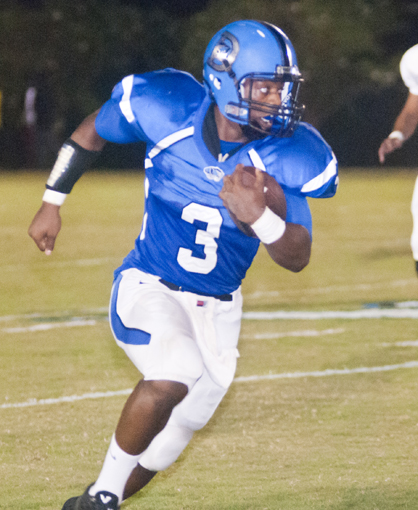 Rashad Lynch takes a handoff around the edge.

The next drive for Demopolis belonged to Lynch. He ran for three first downs and eventually finished the drive with a 16-yard TD run, giving Demopolis the 14-0 lead.

After another short drive by Jemison, Demopolis struck quickly on their first play of their next drive. McVay outran the Panther defense for 67 yards and a score to put the Tigers on top 21-0.

After forcing a three-and-out to open the second quarter, Jones was able to block the Panthers’ punt to give Demopolis possession at the Jemison 22 yard line. On the next play, McVay ran for the 22-yard score.

A turnover on downs by Jemison put Demopolis’ offense back on the field for another chance at a one-play drive. This time, Craig burst through the hole and broke several tackles on his way to a 56-yard touchdown run, putting DHS up 35-0 with 8:08 to play in the half. 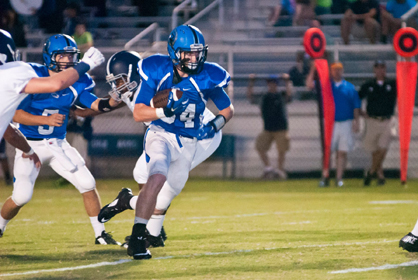 Demopolis’ final score of the half came on a 23-yard run by Jones to put the Tigers up 42-0 heading into the locker room.

Ezell took advantage of his opportunity at quarterback as the second half began and ran for a 55-yard touchdown early in the third quarter to give Demopolis its final touchdown of the game.

DHS kicker Tyler Overstreet was 7-for-7 on extra point attempts in the game.

Jemison’s only score came halfway through the fourth quarter on a 17-yard run by Rashaun Daniel, making the final score 49-6.

The Tigers ended the game with 312 rushing yards on 27 carries. Jemison totaled 179 yards of offense in the game with 111 of those coming through the air.

“That will be Helena’s first home game in school history, so there’s going to be a lot of emotion there,” Causey said. “Our effort and attitude was great tonight, and we need to continue that into next week.”