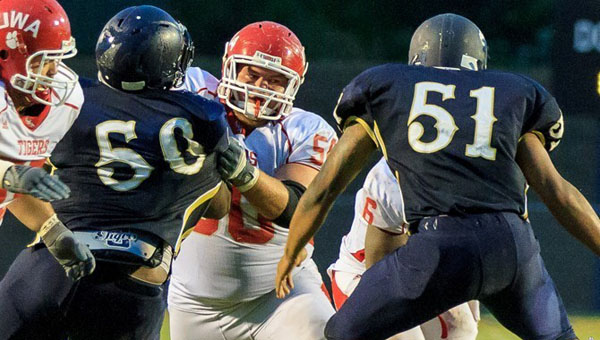 UWA center Jess Allen looks to impress in his first home start for the Tigers.

It’s obvious that Allen has well placed friends in the UWA sports information office that can make a player as tall as he or she needs, or wants, to be.

Determined to play like a giant and earn his own way at a place where his father Steve also played, Allen dedicated himself to being able to play like he was 10 feet tall.

Saturday evening Allen will make his first start at Tiger Stadium when the Tigers host Shaw University Saturday at 6 p.m. He started at center in last week’s win at Stillman, but Allen says its different at home.

With his dad and granddaddy in the stadium for this one, Allen is ready to help lead a UWA offense capable of making a big play at any time.

Allen has come miles since showing up in the fall of 2012 from Patrician Academy. He redshirted in 2012 and played sparingly in a reserve role in 2013 as the Tigers won back-to-back Gulf South Conference titles.

“This first home start means a lot to me,” Allen said. “My dad played here. My granddaddy also played college football and he is going to be here Saturday.

“They will be proud. They always tell me they love me and I truly enjoy the relationship I have with them” Allen said. “They will also be sure to tell me what I did wrong, which is also a good thing because they know what they’re talking about.”

Despite being vertically challenged in a world where offensive linemen routinely stand around 6-foot-5 or better, Allen knew one thing – how to win.

He helped lead his high school team to a pair of state championships while earning all-state honors along the way. With a quiet confidence he relied on hard work to earn his place as a starting center for a college football team.

“How far Jess has come is tremendous,” UWA head coach Brett Gilliland said. “A lot of it was that he grew over the course of the spring and he has really bought into what we are trying to do and what Coach (Adam) Ross is doing with them up front.

“In the summer he put in tons and tons of work to get stronger, faster and more agile and it shows,” Gilliland said. “He is a very smart player anyway and he has grown leaps and bounds.”

Shaw comes into Tiger Stadium 0-1 after opening the season with a 30-6 loss at Miles College last week. UWA is 1-0 after winning 44-20 at Stillman College. There aren’t many similarities between Stillman and Shaw, however.

“Shaw is a big and strong. They like to play physical football and are really good on the defensive front,” Gilliland said. “They are a ground and pound bunch. Defensively, they are sound. They play one or two fronts and are good at them. They don’t get out of place a lot and it’s obvious they are well coached.”

Tiger defensive back Javonte Martin, who will also being experiencing his first taste of the fans at Tiger Stadium, called the Bears a “good, disciplined football team.”

A senior transfer from Georgia Southern who made four tackles in his Tiger debut at Stillman last week, Martin echoed his head coach.

“It will be my first time to play in front of these Tiger fans,” Martin said. “I know they come out and definitely support us. We have great fans and I am pumped up to get to play here in front of them.”

There is no television for the game. The radio broadcast can be heard in the twin states on ESPN 104.9 and worldwide on www.espn1049.com with Lee Tracey and Robert Upchurch on the call.

West Alabama will offer a video stream at http://portal.stretchinternet.com/uwa/ and live stats are available at http://www.sidearmstats.com/uwa/football/.

Tickets will be available at the gate for $10.